A sheriff in Ohio thinks one way to prevent mass shootings at schools is to arm teachers and make sure they know how to protect their students. 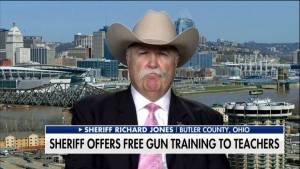 One day after the shooting at Marjory Stoneman Douglas High School in South Florida, which left 17 people dead, Butler County Sheriff Richard Jones posted a video to Facebook explaining that “the current way we do things in the school system needs to be changed.”

“We need to put armed personnel in schools,” he said in the video. “We need to look at metal detectors. This is not going to stop or go away but we need to be prepared and we don’t need to have our heads in the sand.”

Later, when explaining who in schools should be armed, Jones suggested that retired police officers or military veterans could be hired as guards. Or, he said, perhaps school teachers need to be armed and trained.

On Sunday, Jones went a step further, posting on social media that he’d be offering a “free concealed and Carry class” for school teachers in his county. Jones said in a follow-up tweet he’d accept 50 candidates for the class, and that interested school employees should email his office. Within 20 minutes, he said he’d already received 50 requests, and interest only grew from there. On Twitter, many teachers responded positively to Jones’ plan, indicating that they’d love to learn how to use firearms to protect their students.

In an interview Sunday with WLWT, Jones admitted that he knows his plan will spark some controversy, but still, he thinks it will be an effective way to deal with the issue at hand. “We’ve got to do something, and I’m doing it today,” he said. “We’re going to teach them about school shootings, what to do when someone brings a gun to the schools and you at least know how to deal with a gun, how to identify the gun, how many rounds that gun can shoot and what a bullet can do.”

He said the final decision about whether or not to arm teachers will come from local school boards, but at least for right now, he’s doing his part to improve school safety. “I believe that school teachers should be taught how to deal with guns, when guns come to the classroom,” Jones told WXIX. “What guns can do when they come to the classroom, and if the school boards want to give the authority to teachers to be armed. The school boards can do that, they have the authority to do it, but I’m going to do my part, and I assume I’m probably the only one in the state of Ohio that’s doing that — but something has to happen.”

Jones is not the only one calling for teachers to be armed. Florida state Sen. Dennis Baxley proposed a bill that would allow certain teachers in the state to be armed. The legislation will be taken up on Feb. 20, according to Breitbart.

Meanwhile, Education Secretary Betsy DeVos said last week that states “clearly have the opportunity and the option” to allow trained teachers to carry guns in schools.

“This is an important issue for all states to grapple with and to tackle,” she told conservative radio host Hugh Hewitt, as reported by ABC News. “I think this needs to be part of the broader, more robust conversation about how we can avoid these things in the future, and how we can ensure that when my child, your child, goes to school in the morning, they’re going to go to a safe and nurturing environment.”