Gabby Douglas Says She Was Conditioned to Stay Silent After Abuse 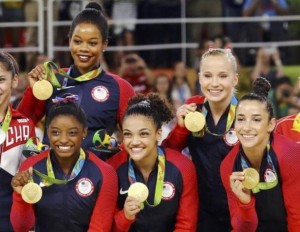 On Tuesday night, Douglas, the 21-year-old Olympic gold medal-winning gymnast, spoke up as one of many women who have been sexually assaulted by the USA gymnastics physician, Larry Nassar. While Nassar has pled guilty to seven counts of first-degree criminal sexual conduct in Michigan’s Ingham County Circuit Court, Douglas was not one of the initial women who came forward with the claims.

For months, her teammate, Aly Raisman, publicly spoke about Nassar’s sexual misconduct before encouraging women to wear whatever they want in response to victim shaming. Douglas was accused of shaming her teammate when she replied to Raisman about the importance of dressing modestly.

Now, Douglas is clearing the air with a second public apology and an admission of having to overcome sexual abuse herself.

“First I want to reiterate my apology for responding the way that I did to a comment that one of my teammates posted,” she wrote on Instagram Tuesday night. “I know some of you may take what I am about to say as insincere, but I still wanted to provide context.”

Douglas explained that she was at an event with hundreds of children and young adults the day before making her comment about modesty, and took her responsibility as a role model seriously. Still, she insisted that she did believe that sexual assault can be prevented by people wearing a certain type of attire.

“I didn’t view my comments as victim shaming because I know that no matter what you wear, it NEVER gives anyone the right to harass or abuse you. It would be like saying that because of the leotards we wore, it was our fault that we were abused by Larry Nassar,” she wrote, admitting that she too was abused. “I didn’t publicly share my experience as well as many other things because for years we were conditioned to stay silent and honestly some things were extremely painful. I wholeheartedly support my teammates for coming forward with what happened to them.”

Douglas’ comment comes days after her teammate, Simone Biles, publicly called her out for the lack of support she showed Raisman by tweeting about the importance of modesty in reply to a call for help.

“Shocks me that I’m seeing this but it doesn’t surprise me… honestly seeing this brings me to tears bc as your teammate I expected more from you & to support her,” Biles tweeted. “I support you Aly & all the other women out there! STAY STRONG.”

Douglas made a plea for forgiveness Tuesday, admitting that she handled the situation terribly in the message that she captioned, “please hear my heart.”

“Please forgive me for not being more responsible with how I handled the situation. To every other individual that commented to or about me hatefully, I apologize that I let you down too,” she wrote. “I will never stop promoting positivity, strength, being courageous and doing good instead of evil. I have learned from this and I’m determined to be even better.”