Gallons Of Oil Are Flowing Out Of A Bible In Georgia – Is This An “End Times Miracle” Or A Cruel Hoax?

For the last 18 months, gallons of oil have been flowing out of a Bible in Georgia, and some are calling this “an end times miracle”. You may be tempted to think that this is some sort of a stunt to make money, but that isn’t happening. In fact, the owner of the Bible actually gives away vials of the oil for free, and people are allowed to freely dip their hands into it. The oil has been submitted to a chemist for testing, and he confirmed that it is oil, but it doesn’t appear to be any sort of oil that is produced by man. So could it be possible that this is a real miracle, or is this just some sort of cruel hoax?

For quite some time, believers have been gathering in the prayer room of a gift shop in Dalton, Georgia for prayer and worship. In January 2017, oil started pouring from a Bible owned by one of those believers, and the oil hasn’t stopped dripping since… 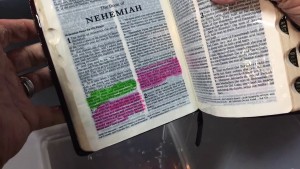 In the back of a little gift shop in Dalton, Georgia there is a prayer room. For the past two years people have gathered there to pray for their city, region, and each other and intermittently oil has dripped from the walls. January 27th of this year one of those prayer warriors, Jerry, noticed his Bible was dripping with oil. Starting with Psalm 39 it spread over the next few days through the rest of the Old Testament, the New Testament, and the concordance. Then the oil started back in Genesis and spread till it covered the whole Bible.

When he realized the oil wasn’t going to stop, Jerry put the Bible in a ziploc bag at first, but as the oil continued, he had to size up to larger and larger containers. The bucket he now keeps it in continues to refill. God told him early on that as long as he gives the oil away freely and does not sell it, the oil will continue to flow. And so in the back of this little gift shop he gives away vials of oil and invites people to dip their hands in it.

So is there anything particularly special about this oil? Well, it is claimed that people have been healed from a number of different diseases after being anointed with this oil, and that includes cancer…

The little gathering in the back of this gift shop was such a sweet place of love and fellowship. Thirty or so people were there praying for one another, giving prophetic words, and sharing testimonies of healing. They are quick to tell you that it is God, not the oil that is healing people, but there are multiple testimonies of how God has used the oil to heal people of cancer, skin rashes, and other diseases. This news article also reports Jerry’s testimony of the oil as it was told to me when I visited.

He sent a sample of the oil to a chemist who says it is most similar to mineral oil, but that it isn’t mineral oil. It’s totally colorless and odorless and according to the chemist unexplainable.

Over time you would think that the oil would damage the Bible, but as you can see in the video above, not even the highlighting that had been previously done has been affected by the oil.

Of course not everyone is convinced. On one Christian website, this miracle was dismissed as a “bizarre and comical claim”… “A weird trend going around in charismatic circles lately is the bizarre and comical claim that by placing a bible in a plastic bucket, that God will somehow perform a miracle of “flowing oil,” producing an olive oil soaked Bible in a bucket that, in the beliefs of these wacky nutjobs, is the real presence of God Himself manifest in this oil.”