Gamechurch is seizing opportunities to reach the gaming community 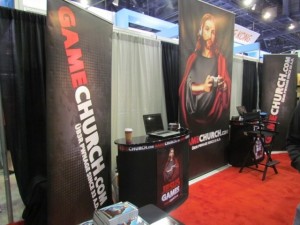 (WNS)–On a hot July afternoon, young people in bright wigs and elaborately hand-sewn costumes filled the Los Angeles Convention Center. For one weekend, Japanese anime characters came to life as 60,000 participants at the annual Anime Expo primped and posed as characters they had painstakingly recreated.

Outside the center, bright yellow signs bobbed with the messages “The Wages of Sin Is Death” and “Eternal Life in Jesus” as a Hispanic man shouted into a loudspeaker. Most people passed by without a glance, as one man wearing a T-shirt with the image of a marijuana leaf held up his own homemade sign that read “God is a LIE.” Inside, though, anime devotees crowded around a booth with a blown-up image of Jesus holding an Xbox controller.

That Gamechurch booth, sandwiched between others selling Pokemon toys and big-eyed anime posters, featured volunteers telling each passerby that Jesus loves them just the way they are, dyed-pink hair and kitten ears included. Gamechurch is a ministry reaching gamers right where they are by attending “nerd culture” conventions and running a video game news website. At Anime Expo, its volunteers passed out lanyards with the words “Jesus loves gamers” in block letters and more than 2,000 “gamer bibles” (the book of John with gamer-aimed commentary) that delve deeper into the gospel message.

Christians now have a small piece of a $21 billion video game industry that caters to tens of millions of Americans: The average age of gamers is 31, and nearly half are women. The games themselves cover a wide range: Not just relegated to first-person shooters or role-playing fantasies, a new crop of empathy games artfully tell interactive stories about difficult topics like depression, autism, and poverty. They are big business: Grand Theft Auto V, a raunchy crime-riddled game, cost a reported $265 million to make, and took in $1 billion in merely three days.

Many churchgoers have a negative view of video games; too violent and too sexual, which many are. But video games have as much variety as movies, which few Christians now boycott, and each highly involved game displays a worldview. Christian gamers see video games as opportunities for parents to bond with their children and for Christians to bond with nonbelievers. At Gamechurch’s Anime Expo booth, most people were curious and inquisitive, some saying that even though they don’t agree with Christianity, they appreciate what Gamechurch is doing. Some signed up for email updates in exchange for a poster of Jesus stylized like a warrior from the film 300.

A few passersby snickered but none expressed hostility. “How do you argue with ‘Jesus loves you’ and free stuff?” asked Chris Gwaltney, Gamechurch’s missions coordinator. “He loves you right now, you don’t have to shower first.” Founder Mikee Bridges, a former alt-Christian rocker who went on to open a skate park, PC gaming center, and now Gamechurch, believes the group is planting seeds at these conventions: One young man emailed to say he read the “gamer bible” on the airplane ride home, gave it to the person sitting next to him who seemed interested, and was emailing Gamechurch to ask for another copy.

Gamechurch also aims to minister to people through the context of relationship–in this case the camaraderie built from fighting monsters or protecting each other from enemy fire. Online multiplayer games such as World of Warcraft group strangers together to fight battles, and Brian Buffon, director of Gamechurch, said the time spent together in the game builds trust so that when a teammate goes through a difficult time such as a breakup, they can turn to him for support, creating an opening to talk.

Christian video game developers have been trying to bring Christ into the industry—mostly to tap the large Christian market—since the 1990s, often by ripping off popular games and adding a biblical twist with titles such as Spiritual Warfare, the Left Behind series, and even Dance Praise. But with the rise of indie developers, more Christian developers have the freedom to create games that aren’t as overtly Christian, but are intertwined with a Christian worldview.

For instance, developer Ryan Green has created a buzz in the past year with his game That Dragon, Cancer, an autobiographical empathy game that follows Green as he deals with his son Joel’s losing battle with cancer from age 1 to age 5. Green started creating the game with developer Josh Larson two years ago as an artistic way to sort out his feelings. In one level of the game, players take on Green’s point of view and find themselves inside of an ICU hospital room with a crying son in the crib, unable to be consoled. Through words on the screen and voice-overs, players hear the thoughts of helplessness running through Green’s mind, until the only option left is to sit down and pray—and the crying finally stops.

Reviewers from secular publications who tested the early demo of That Dragon, Cancer, praised the game, many leaving with tears in their eyes as they recalled loved ones they’d seen in that position. Green wrote that as a Christian game developer he had “the power to limit choice, to bend the player’s knee in prayer, to create a black and white world in which the pillars of faith can be crammed down their throat in megabyte-sized chunks. If I did that, then I would not be much like the one person in history I desire to emulate.”