Gay Olympians are accidentally proving why same-sex ‘marriage’ is wrong 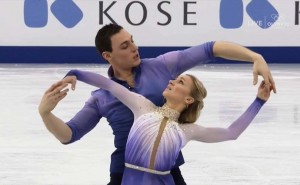 (LifeSiteNews) – While the mainstream media’s fawning coverage of gay and lesbian Winter Olympic athletes is relentless, the most important story out of Pyeongchang, South Korea was underreported, if not completely ignored.

A surprising message delivered by gay men is being displayed for all the world to see in the Gangneung Olympic Ice Arena. The three “out” gay male figure skaters in this year’s Winter Olympics are partnered with women, not men, precisely because their sport is wholly reliant on complementarity. Without the complementarity of the male and female skaters, the event ceases to exist. Yet much of the world has been blinded to the fact that this very natural truth applies even more to marriage than it does to skating.

These gay skaters know it innately: They wouldn’t have an Olympic event if they didn’t have a female partner. Gays––and the entire world which admires the beauty of these couple’s performances––understand that. And so despite being same-sex attracted, despite the demands of LGBT ideology, they choose not a same-sex partner, but a woman.

And Global LGBT, Inc., remains quiet and neither complains nor objects because this truth is utterly indisputable. They certainly don’t want to call attention to that. Global LGBT, Inc. knows that to put two men out on the ice for this event would undermine––not perpetuate––the grand pretension of “marriage equality” and the legitimacy of sexualized mono-gendered relationships. If it were to be attempted, the entire illusion might crumble to the ground.

Commenting on Facebook, Joseph Sciambra, a same-sex attracted Catholic man, describes the wondrous, naturally irresistible appeal of it all:

Breathtakingly beautiful – a perfect demonstration of the complementarity between man and woman and how their God-given differences can create art of the highest caliber; but why won’t the Olympic Committee open these events up to same-sex couples? Because, unless they are perhaps the diminutive Elio and the towering Oliver from “Call Me by Your Name,” the majority of these jumps and spins would be impossible for two men or two women – and then: wouldn’t it lose something? Because someone would have to take on a more masculine role – and the other a feminine one – at that moment it becomes caricature. Then, you don’t have harmony, but an awkward imbalance. Works better when it’s all built into the machinery.

Roxane Salonen noted a few years ago: There is something so beautiful about a man and a woman flying across the ice; the strength of his masculinity serving as her rock, her foothold, and the fluidity of her femininity in beautiful contrast, dancing around his solidity.

These were the innocent feelings of a child, but it was coming from the gut level and felt very real to me then, and it still does to this day. And I think it has to do with this: male and female God created them. It’s basic and it’s beautiful. And when we see it, we have a deep-down-in-the-soul reaction to it.

I would even call it sacred. To me, these team skaters exemplify God’s creative vision of complementarity; a picture of flourishing fragrance that can happen this fully only when cooperation with God’s vision is in place.

I also love that team skating is a demonstration of two bodies working together, closely and in harmony, and not in a way that is obscene. We’re more accustomed these days to a distortion of God’s beautiful plan for humanity, when both men and women are objectified, and the soul is shirked. Because it is more rare to see this more tasteful version, it stands out as extraordinarily lovely and classy, and is cause in some cases, apparently, for one’s temporary abandoning of an exercise plan.

While the graceful performances of these couples appear effortless, we all know that years of hard work and dedication go into these amazing performances, not unlike every successful marriage.

For years society has been assaulted by “Fake News,” i.e., lies, about same-sex “marriage,” homosexuality and now, transgenderism.

We should all be grateful to these gay figure skaters––who perhaps unwittingly––are setting the record straight.