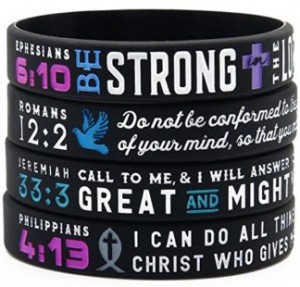 BALTIMORE, Md. – Pray Live, a division of the Maryland Prayer Center, is responding to gun violence in America by giving concerned school children and their families prayer wrist bands to wear. Thousands of children have died or been injured from gun violence. The organization’s founder, Wenda Royster, says God gave her an urgent message.

In a moment of intense prayer God said: “‘I need you to heal this nation by reminding school children and their parents that no matter what is going on around them, I am always there,'” she said. “‘Remember, only prayer changes behavior and things.'”

“So, I created wristbands for mass distribution across the Country to remind our children that God is there with them, and that prayer changes things.” She says the bands are red in color which is symbolic of the blood of Jesus, and they include a short prayer as well as the scripture Luke 18:1, “…Always pray and not give up.”

“We have produced a simple red wristband for K-12 with a prayer for students to wear by doing so prayer is in the schools while the bands are worn,” she says. “This is not about religion or denomination it is about how prayer changes things to include behavior.

“There are critics who may say: ‘how is a rubber wristband going to protect my child from gun violence?’ My response to that is you never hear about acts of gun violence happening at faith-based schools where the Word is taught, and prayer is prevalent.”

“So, we must take our pleas to a higher power, inviting God back in our schools, if we want to see real change in our schools.” She is asking for other members of the faith community and beyond to support this effort, so she can get Maryland Prayer Center’s bands across America.

HOW YOU CAN HELP
To get Prayer into schools across America, through the Maryland Prayer Center, make your charitable donation to the Center whose EIN Number is: 27-3914435.

ABOUT PRAYER BANDS
Pray Live produces the prayer bands and ships them upon request. The demand for the bands has been overwhelming across the Nation (with a recent order of nearly 10,000 bands). Pray Live needs your support.