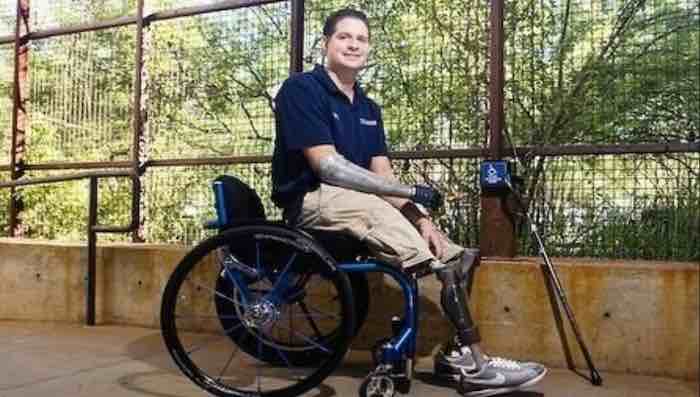 At a time when he’s needed most, triple amputee veteran and Purple Heart recipient Brian Kolfage, is a miracle in the making.

Since December 16th Kolfage has raised over $16,267,223 (at press time) and still growing on a Go Fund Me campaign to pay for the wall on the U.S. border with Mexico and is well on his way to collect the first $1 billion towards the Wall’s funding.

Convinced that the best way to separate a beleaguered President Donald Trump from the 63 million Americans who voted for him, deranged Democrats intend to celebrate their victory with ear-splitting whoops of joy on January 3, 2019. Nancy Pelosi already performed her dance of joy at a going away party for Rep. Joe Crowley in a New York bar recently.

Crowley, defeated in his New York primary by Socialist-Democrat, (“no-time-for-Yoga”) Alexandria Ocasio-Cortez strummed his guitar and sang while Pelosi and other Democrats kicked up their heels celebrating that Republican lawmakers have folded once again on border wall funding.

As they head into a bound to be raucous January 3rd House takeover, Pelosi and the Dems count on a lot of whoop-it-up partying. Kolfage counts on a plan:

“We have contacted the Trump Administration to secure a point of contact where all funds will go upon completion.

“Like a majority of those American citizens who voted to elect President Donald J Trump, we voted for him to Make America Great Again. President Trump’s main campaign promise was to BUILD THE WALL. And as he’s followed through on just about every promise so far, this wall project needs to be completed still.

“As a veteran who has given so much, 3 limbs, I feel deeply invested to this nation to ensure future generations have everything we have today. Too many Americans have been murdered by illegal aliens and too many illegals are taking advantage of the United States taxpayers with no means of ever contributing to our society.

“I have grandparents who immigrated to America legally, they did it the correct way and it’s time we uphold our laws, and get this wall BUILT! It’s up to Americans to help out and pitch in to get this project rolling.

“When [we] get this information secured we will update. We have many very high-level contacts already helping,” the Go Fund Me page states.

While it’s unlikely Pelosi and her Dancing Dems won’t be asked for an encore, the millions who already paid the price for our freedom, will be silently cheering Brian Kolfage on.  They are the ones to whom John Williams dedicated the “Hymn to the Fallen”.

“Kolfage writes that the Democrats will go to any lengths to deny Trump a victory on his wall promise and goes on to ensure the validity of his cause to those who want to donate, including sharing a link to his Facebook page and his website, BrianKolfage.com.

“This won’t be easy, but it’s our duty as citizens,” Kolfage writes. “This needs to be shared every single day by each of you on social media. We can do it, and we can help President Trump make America safe again!”