(WNS)–When Ryan Hollingshead spurned money and playing time in Major League Soccer (MLS) in 2013 to plant a church with his brother, outsiders tried to convince him not to waste his opportunity.

Hollingshead took their advice. But for him, the church was that opportunity.

Hollingshead, 23, and his brother Scott, 28, both played varsity soccer at UCLA. Both developed a desire for church-related ministry in their hometown of Sacramento.

When Ryan Hollingshead learned that his brother would start planting a Harvest Bible Fellowship church at the end of Ryan’s 2012 season at UCLA, he decided to forgo the MLS draft—and a top-five projection—and work with his brother instead. It was almost a “no-brainer,” he told me. He wanted to work alongside Scott when it was hardest, not after God had already established the church. 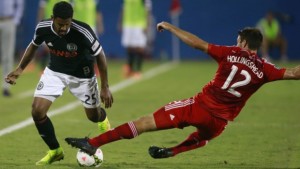 When MLS teams called him regarding the draft, Ryan told them he would probably never play. He spent draft day in Haiti at an orphanage with the woman who is now his wife. But the FC Dallas soccer team drafted him at No. 20 anyway, informing him they knew of his commitment and were willing to take the risk.

Dallas occasionally checked in as Ryan worked a day job in real estate and helped Scott at night. It was easy to get discouraged working 80-hour weeks on meetings that drew six people. Scott says his brother encouraged him when it was hard: “Ryan was always the one to kind of steer me back and be like, ‘No, Scott. The Lord is in this.’” Harvest Bible Chapel Sacramento officially launched in October, and a quickly meshing body relieved the burden on both of them.

Ryan signed with FC Dallas in December after a year with no practice. “Everything was slow,” he said. “My legs were … heavy. My touch was off. My thought process—I never knew what I wanted to do with the ball.” He’s now earning playing time, including his first start Aug. 16 at San Jose in front of Scott and the family. “I’ve got a lot more room to grow,” he said. “That makes me happy.”