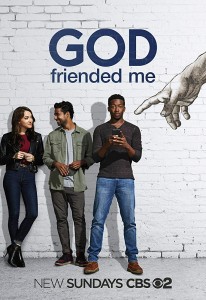 CBS has an upcoming show that puts God on social media. “God Friended Me” will begin its run this fall and the network has just released a 6-minute trailer to introduce the show.

Brandon Micheal Hall (“The Mayor”) leads the cast of “God Friended Me” as Miles Finer. He’s a podcast host who grew up in a religious household with a minister for a father, but he now openly claims that God does not exist.

One day, however, Miles receives a friend request from God on Facebook and thinks someone is toying with him. He asks a friend’s help to find out if he’s been hacked but then mysterious incidents start to unfold that allow Miles to help strangers. He begins to question if there’s really someone behind a grand design in this world.

The show also stars Violett Beane (“The Flash”) as Cara Bloom, the journalist who tries to help Miles get to the bottom of who actually created the God account on Facebook. Also in the cast are Joe Morton (“Scandal”), Suraj Sharma (“Homeland”) and Javicia Leslie (“MacGyver”).

“Arrow” and “Supergirl” creator Greg Berlanti produced the series that splices humor, spirituality and feel-good moments together. Steven Lilien and Bryan Wynbrandt created the show but CBS has not yet announced the number of episodes.

Incidentally, Hall is the opposite of his atheist character in real life. In an interview with GQ, the actor stated that he’s a very spiritual person who had quite a religious upbringing as a Southerner.

Hall not only believes in God but he also believes he has a guardian angel and they share the same name. “I believe my archangel, the guy who protects me, is Micheal from the Bible, and his is spelled “Micheal,” the actor shared.

“God Friended Me” is set to air Sunday nights at 8:00 on CBS this fall. The network has not yet announced its premiere date.