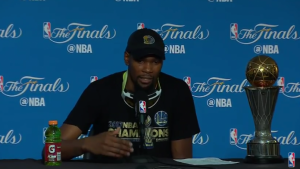 In sports, like life, it’s not about the victories, but often, it’s about the adversity and overcoming the challenges that are presented along the way.

In 2015-16, the Golden State Warriors had the highest of highs, winning the most games in the history of the NBA regular season, to the lowest of lows, blowing the biggest lead in NBA Finals history, losing to the Cleveland Cavaliers after leading three games to one.

But redemption is sweet, and the Warriors turned it around in a big way, beating LeBron James and the Cavaliers last night 129-120 to capture the NBA Championship.

The biggest difference from last year to this year, clearly, was the addition of Kevin Durant. In five NBA Finals games played, Durant scored 30 points or more in every game, and was named the NBA Finals MVP.

“We did it together man,” Durant said in the postgame press conference. “They call us a super team, but there’s been a lot of super teams that hasn’t worked. We came together, continued to believe in each other and we sacrificed, and we champs now.”

Durant, a Christian, has often been outspoken about his faith and in the postgame press conference, credited the people who have poured into his life, including Pastors John Gray of Lakewood Church in Houston and Carl Lentz, of Hillsong NYC.

“People just continued to pour into me, every single day,” said Durant. “People like John Gray, Carl Lentz, Adam Harrington. People you may never have heard of who poured into me every single day. I’m working everyday, grinding, and believing in myself to make this happen and to do it feels great.”

In 2015, Durant told Pastor Craig Groeschel that his favorite bible verse is Jeremiah 29:11 — “For I know the plans I have for you,” declares the LORD, “plans to prosper you and not to harm you, plans to give you hope and a future.”

Durant won his first championship last night in his 10th NBA season. He is well on his way to the Hall of Fame when he retires, but at just 28 years old, there’s a lot of basketball yet to be played.