GOP Election Rout, But How Much Will Change? 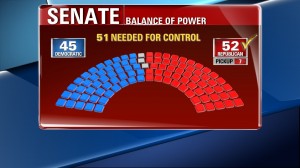 Voters gave Republicans control over the U.S. House and Senate, as well as more governorships and state legislatures in the recent election, smashing the notion touted by MSNBC analysts after the 2012 election that the nation was turning irreversibly blue. Republicans picked up at least seven U.S. Senate seats and an additional dozen seats in the U.S. House of Representatives.

Senator Rand Paul (R-Ky.) boasted on his Facebook page, “Today, voters sent a message to President Obama and Hillary Clinton, rejecting their policies and many of their candidates.”

Republicans picked up Democratic U.S. Senate seats in Arkansas, Colorado, Iowa, Montana, North Carolina, South Dakota, West Virginia, and Alaska guaranteeing them at 53 of the 100 seats in the U.S. Senate.

Outgoing Senate Majority Leader Harry Reid (D-Nev.) congratulated Minority Leader Mitch McConnell (R-Ky.) on his reelection and Senate take-over, stating, “The message from voters is clear: They want us to work together. I look forward to working with Sen. McConnell to get things done for the middle class.”

The next Congress will feature at least 243 Republicans in the House, a pickup of at least 12 seats, with more likely to be added as tight races are called. Utah also sent the first Republican African-American woman, former Sarasota Springs Mayor Mia Love, to Congress.

Republicans picked up governorships in the bluest of blue states — Massachusetts, Maryland, and Illinois. They also won the Arkansas governorship but lost control of the Pennsylvania governorship. 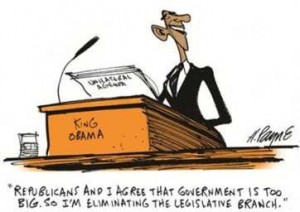 But What Will Change?

With the Republicans sweeping to power, one might expect a dramatic change in governance in Washington. After all, the Republican Party is widely perceived as the conservative party and the Democrat Party as the liberal party. And many undoubtedly voted for Republican candidates because they believe government has grown too large and were rejecting the liberalism of the Democrat Left.

But though advocates of less government should find encouragement in the shift in public sentiment that the overall election results indicate, they should also be realistic regarding the extent to which this shift in public sentiment may translate into a change in Washington. Regarding the latter, little is likely to change, because most of the new Republicans will be of the neoconservative or even liberal variety. While the Tea Party and libertarian-leaning challengers largely failed in the primaries, most incumbent Liberty Caucus candidates also won their primaries, making this largely a status-quo election ideologically.

New North Carolina Senator Thom Tillis was a liberal Republican who defeated more conservative challenger Greg Brannon in the primary. Likewise, many of the new Republicans in the Northeast are leftist-leaning, such as new Massachusetts Republican Governor Charlie Baker, who is militantly pro-abortion and openly hostile to the Second Amendment.

The partisan swing in the U.S. House of Representatives may even free House Speaker John Boehner from the influence of the House Liberty Caucus and the Tea Party movement, as Boehner has more votes to spare in his majority with the victories of new neoconservatives and Northeastern liberals. This could mean that the influence of libertarian-leaning representatives will be diluted.

Ballot Measures
Americans also failed to uphold a coherent ideology on local ballot questions, approving statewide increases in the minimum wage (Arkansas, Illinois, Nebraska, South Dakota, and Alaska) and approving legalization of marijuana (Oregon and the District of Columbia). Even in conservative Florida, where a ballot measure failed to legalize marijuana for medical purposes, voters nearly reached the 60 percent threshold needed for passage by a vote of 57-43 in favor of the measure. Voters in Massachusetts rejected two taxes, but approved a tax on millionaires in Illinois.