WASHINGTON, DC – In the Middle East, the birthplace of Christianity, Christians and other minorities are being violently persecuted, driven out of their homes, and killed. Their places of worship are being destroyed, and their history is being erased.

Entitled FAITHKEEPERS, this powerful new documentary tells the uplifting true stories of those who suffered and refused to renounce their faith.

Premiering May 23, FAITHKEEPERS is the latest film by The Clarion Project and Lightworks Media that uncovers the horrific reality faced by so many simply for being who they are. 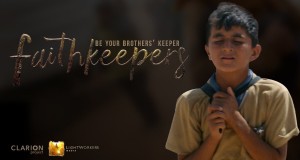 The documentary gives face and voice to the humanitarian crisis and genocide affecting millions in the Middle East as a result of religious and ethnic persecution.

In Iraq and Syria, ravaged by war, Christians, Yazidis and other minority groups are suffering grievously under the yoke of terrorist groups like the Islamic State. Christian communities that fall under their control are given a simple choice: convert to Islam, pay the jizya, a humiliating protection tax, or die.

A testament to the inspiring stories of persecuted Christians, the films producers include Emmy nominated actress and producer Roma Downey, U.S.-trained lawyer Paula Kweskin, and Raphael Shore, founder and CEO of the Clarion Project.

Award winning narrative and documentary filmmaker Micah Smith is director of the documentary.

“We would like to awaken the Christian community and all people of conscience to understand and be empowered to take action on behalf of Christians and other minorities in the Middle East who are experiencing genocide,” said Kweskin. “We feel there is a real lack of information and this is first and foremost a film to educate people and wake them up about this humanitarian crisis.”

Join thousands across America to experience the inspiring stories of courageous Christians sacrificing for their faith in the Middle East. This important movie experience is available to your church for free.

While there is no cost to the church to host the event, costs are covered by ticket sales. Tickets are $8 per person, which includes a $1 ticketing surcharge.

For more information go to www.faithkeepers.clarionproject.org.