Haitian migrants have been released from crowded jails in Arizona and California as officials struggle to keep up with the number of those trying to enter the US illegally from Mexico.

They have been released on the condition that they agree to return to immigration court on a decided date and are allowed to live in society monitored by ankle tags until then.

An unnamed official said the immigrants are vetted before release to check for dangerous criminal backgrounds or other threats. It comes after a surge in the number of Haitians attempting to enter the US this year. 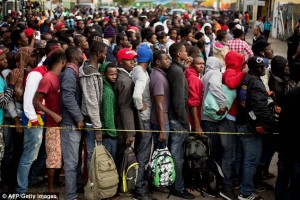 The Associated Press reports that 5,000 Haitians arrived at San Ysidro, one of California’s busiest border crossings, between October 15 and late September this year. It boosted the illegal immigrant population in jails from 34,000 to 41,000 alongside a surge in other nationalities trying to gain access to the country.

To combat the higher numbers, prison officials have been releasing non-threatening Haitians into the community.  They are released on the condition that they promise to appear at immigration court later to have their cases assessed.

It is a reversal on the government’s recent vow to deport Haitian immigrants who have not faced being sent home for years.

President Obama halted automatic deportation for Haitians after the country suffered a devastating earthquake in 2010, claiming it would put their lives at risk to send them back to their shattered homeland.

In September, his administration vowed to resume flights for undocumented workers in response to the growing numbers. Homeland secretary Jeh Johnson said conditions had improved ‘sufficiently’ to return them to Haiti.

ICE spokeswoman Jennifer Elzea said in a written statement it is removing Haitians in accordance with its enforcement priorities. ‘ICE prioritizes the removal of national security threats, convicted felons, individuals convicted of significant or multiple misdemeanors, and individuals apprehended at or between ports of entry while attempting to unlawfully enter the United States,’ she wrote.

The large numbers of Haitians arriving in California and Arizona, and Central Americans coming across in Texas have put a tremendous strain on the system.