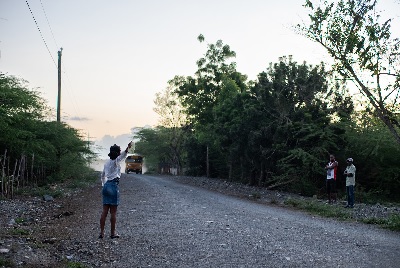 Intended to help rebuild Haiti after a devastating 2010 earthquake, the Caracol Industrial Park launched in 2012 and promised a bright future for Haitians. Funded by the US government and the Inter-American Development Bank (IDB), the $300 million, 600-acre park would host garment factories producing clothes that end up at Target, Old Navy, Nike, Victoria’s Secret, and Walmart, among others.

To make room for the park, authorities seized land from around 400 farming families — a total of around 3,500 people who relied on the plots for food and income — and promised to compensate them with new land elsewhere, 65,000 local jobs, and scholarships for their children.

But a 2018 agreement between the families and the IDB has only partly been implemented, and more than 80% of the families eligible to receive land are still waiting while struggling to put food on the table. “Maybe they’re waiting for people to die so they don’t have to give them land,” said one Caracol farmer, Remy Augustin.

“We had dreams but nothing happened in our lives,” said Duone, whose family lost their farmland and couldn’t afford to send her to college as a result. After finishing high school, Duone deferred her dream of becoming a nurse and currently works for a textile factory inside the park. “I don’t dream about it anymore.”

And now, the Caracol Industrial Park is set to grow: In November, the IDB announced that it had approved $65 million to expand infrastructure in hopes of attracting more companies.