ISRAEL (ANS) — Amidst growing tension on Jerusalem’s Temple Mount, where rocks and firebombs are being thrown at riot police as Palestinian hatred for Israel threatens to boil over once more, there is still hope for peace.

Just ask Mosab Hassan Yousef, who grew up causing trouble in the West Bank and later switched sides after being sickened by the hypocrisy and deceit he witnessed.

“There is hope for peace in the Middle East, but it does not begin with political solutions or negotiations; it begins with the changing of individual hearts,” he writes in a new edition of his New York Times bestseller, Son of Hamas, which contains an update in the form of an extra chapter. And his story is now also told in The Green Prince, an award-winning documentary. 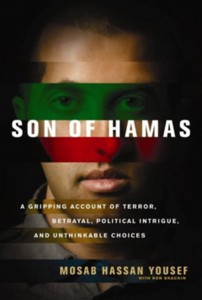 Mosab was just 18 when he was first arrested by the Israelis who found him in possession of weapons (that turned out not to work). He was the son of the founder and leader of the much-feared Hamas terrorist organization committed to the destruction of Israel.

After being severely beaten up during interrogation, he succumbed to the lure of being a collaborator. Although hating the Jews, he persuaded himself that he was a “double agent” with the ultimate intention of killing his new masters.

But as he witnessed fellow inmates being tortured by their Muslim “brothers” on the flimsiest evidence of being informers, he was increasingly nauseated by the insincerity of those among whom he mixed both in and out of jail.

They pretended their cause was for the love of their people, but in reality cared little for anything but lining their own pockets and giving full expression to their hatred of the “enemy.”

Ironically, his famous father was a loving family man caught up in political intrigue he didn’t fully understand.

At the same time Mosab was developing a close friendship with his contact for Shin Bet, the Israeli secret service, whose kindness was in sharp contrast to the brutal dealings of his Muslim colleagues.

Mosab ended up working for Shin Bet for ten years – with the codename Green Prince (as heir apparent to the green-flagged Hamas) – during which time he witnessed many gruesome scenes including the aftermath of suicide bombings and the bloodbath often ensuing from a clash between the IDF (Israeli Defense Force) and some of those he “shopped.”

Though at constant risk to his own life, he became a vital cog in Israel’s spy network and there is no doubt that many innocent lives were saved as a result.

In the midst of these shadowy activities, he had a literal ‘Damascus Road’ experience. He was walking past the imposing Damascus Gate leading into Jerusalem’s Old City when he was invited to a Bible study at the YMCA where he was introduced to the New Testament, and to Jesus.

He was powerfully impacted by the words of Jesus – especially his “Sermon on the Mount” and his call to “love your enemies” – which greatly affected his ongoing surveillance work; at times he even managed to persuade his bosses simply to arrest, rather than assassinate, dangerous men suspected of plotting mass murder.

He eventually broke away entirely from his Islamic roots and fully embraced Jesus as the Son of God. But his full, amazing story could not be told until he was safely in America, where the courts initially wanted to send him back – to almost certain death – because they wouldn’t believe his testimony.

Following his conscience, and his faith, has cost him dearly – his family, to whom he is devoted, have disowned him. Such is the price many with Mosab’s Muslim background have had to pay as disciples of Jesus.

Published by Tyndale Momentum, Son of Hamas was co-authored by ANS correspondent, Ron Brackin, and includes a new chapter on his U.S. court hearing.