(WNS)–Forty years ago today, the Hyde Amendment, a spending prohibition banning federal funding for most abortions, became one of the pro-life movement’s first major legislative victories. But after decades of bipartisan support, the life-saving policy is in jeopardy.

“Lives are literally at stake in this election,” said Mallory Quigley, spokeswoman for the Susan B. Anthony List. “This is for the soul of our nation.”

Congress ratified the first Hyde Amendment on September 30, 1976, and lawmakers have included the language in spending bills each year since. The policy rider bars taxpayers from paying for abortions through Medicaid and is responsible for saving as many as 60,000 babies each year. But despite years of wide-ranging support, the Hyde Amendment’s survival could hinge on the election in November. 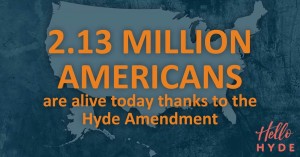 In January, Democratic presidential nominee Hillary Clinton said the Hyde Amendment had run its course. She told a crowd in New Hampshire too many low-income women don’t have access to abortion because they can’t afford one and the government should be there to help them to “exercise their full rights.”

Then, for the first time ever, the Democratic Party committed in its platform to dismantling the long-standing legislation during the party’s convention in July.

Even among liberal lawmakers, advocating taxpayers pay for abortion has long been taboo, but that’s no longer the case.

Quigley told me pro-abortion groups are shifting their messaging. After years of losing at the state level, Quigley said the groups want to make limits on abortion funding seem like an economic injustice.

“This is such a brutal message to be sending to those who are materially poor,” Quigley said.

Conservative estimates suggest in the last 40 years the Hyde Amendment has saved 1.1 million lives, and according to a new report from the Charlotte Lozier Institute (CLI), that number could be over 2 million.

“When the Hyde Amendment took effect, the birthrate among women on Medicaid increased by an average of about 13 percent,” wrote Michael New, a CLI associate scholar. “That means in U.S. states that do not fund abortion through Medicaid, one in every nine people born to a mother on Medicaid owes his or her life to the Hyde Amendment.”

At the local and state level, there are some places where women can defray some of the cost of abortion. Of women ages 15 to 44 enrolled in Medicaid, around 60 percent reside in 35 states and the District of Columbia that do not cover abortion except to save the life of the mother or in cases of rape or incest.

Republican nominee Donald Trump has a mixed track record on abortion. But last week, he sent a letter to pro-life leaders reiterating a commitment to “[make] the Hyde Amendment permanent law to protect taxpayers from having to pay for abortions.”

“Hillary Clinton not only supports abortion-on-demand for any reason, but she’d take it a step further: She wants to force the taxpayers to pay for abortions by repealing the bipartisan Hyde Amendment,” Trump wrote. “[This] stands in stark contrast to the commitments I’ve made to advance the rights of unborn children and their mothers when elected president.”