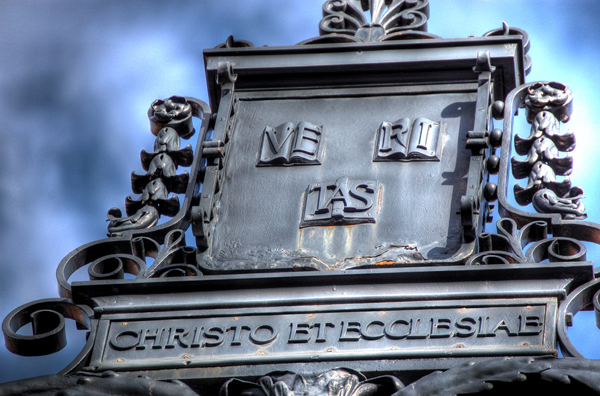 John Harvard’s grandfather lived in Stratford-upon-Avon and was an associate of Shakespeare’s father. His father was a butcher and owner of Queen’s Head Inn and Tavern.

John Harvard was born in London and baptized on November 29, 1607, in the old St. Savior’s Parish near the London Bridge (present-day Southwark Cathedral).

Most of his family died when a plague swept England in 1625, the same year the pilgrims sent a shipload of beaver skins to London for trade, but it was captured by Muslim pirates. John Harvard’s mother and surviving brother died not long after the plague, leaving John the entire family estate.

John is believed to have attended the grammar school at St. Savior’s, where the rector, Nicholas Morton, would have diligently prepared him for acceptance into Cambridge, an amazing achievement for someone of the commoner class.

A classmate of his at Emmanuel College was John Sadler, who became London’s town clerk, a Member of Parliament, and private secretary to Oliver Cromwell. John Sadler was a contemporary of other notable figures, such as: Francis Bacon, Robert Boyle, Samuel Pepys, Samuel Hartlib, and John Milton.

John Sadler was a Puritan who was also a student of Hebrew, called a “Christian Hebraist.” In 1649, Sadler wrote The Rights of the Kingdom, which examined ancient Israel’s influence on the British Commonwealth, particularly the separation of powers.

Christian Hebraists were Protestant and Catholic scholars, who, in the century after the Renaissance and Reformation, intensely studied:

John Sadler’s sister was Ann, with whom John Harvard fell in love. They were married at St. Michael the Archangel Church in 1636, the same year the College at Cambridge was founded in Massachusetts.  In 1637, John and Ann Harvard sailed for Massachusetts where he took “the freeman’s oath,” and served as a teaching elder and an assistant pastor at the First Church of Charlestown, under Rev. Zechariah Symmes. Charlestown, at that time, had about 150 families.

At age 31, Rev. John Harvard contracted tuberculosis and died on September 14, 1638. The record of where his grave is located was lost during the Revolutionary War. 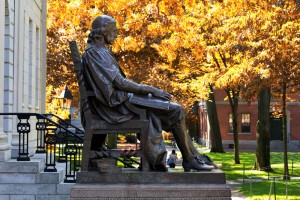 Having no male heir, John left half of his 1,600 pound estate to the College at Cambridge, along with a library of over 400 volumes. John Harvard’s library included Bible commentaries, volumes in Hebrew and Greek, an Aramaic lexicon of the Talmud, and books by Homer, Plutarch, Aquinas, Bacon, Calvin, and Luther.

After being used by colonial scholars for over a century, a fire in 1764 destroyed all John Harvard’s books, except one, The Christian Warfare Against the Devil, World and Flesh And Means to Obtain Victory, written by John Downame, published in 1634.

The General Court of Massachusetts Bay voted to name the College at Cambridge after John Harvard. On the wall by the old iron gate at Harvard University’s main campus entrance, and also noted in Harvard Divinity School’s catalog, is the statement of Harvard’s founders:

“After God had carried us safe to New England, and wee had builded our houses, provided necessaries for our livelihood, rear’d convenient places for God’s worship, and settled the Civill Government:

One of the next things we longed for, and looked after was to advance Learning and to perpetuate it to Posterity; dreading to leave an illiterate Ministry to the Churches, when our present Ministers shall lie in the Dust …

… And as wee were thinking and consulting how to effect this great Work, it pleased God to stir up the heart of one Mr. Harvard, a godly gentleman and a lover of learning there living amongst us, to give the one half of his estate … towards the erecting of a college and all his Library.”

Harvard’s declared purpose was: “To train a literate clergy.” This was consistent with 106 of the first 108 schools in America, which were founded on Christianity.

Ten of the twelve presidents of Harvard prior to the Revolutionary War were ministers. Fifty percent of the 17th-century Harvard graduates became ministers. Harvard College was founded in “In Christi Gloriam” as its founders believed: “All knowledge without Christ was vain.” 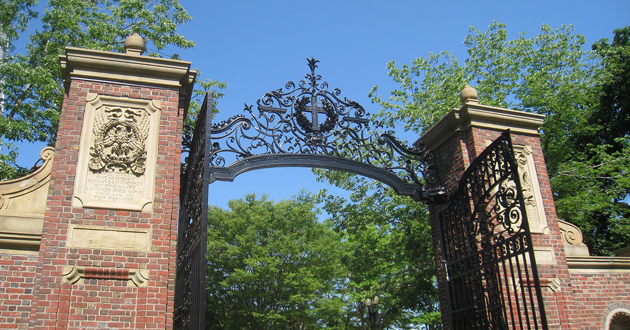 The shield has on top two books facing up and on the bottom a book facing down, symbolizing the limits of reason and the need for God’s revelation.

1. When any Scholar … is able to make and speak true Latine in Verse and Prose … And decline perfectly the paradigims of Nounes and Verbes in the Greek tongue … (he is allowed) admission into the college.

In 1790, the requirements for Harvard stated: “All persons of what degree forever residing at the College, and all undergraduates … shall constantly and seasonably attend the worship of God in the chapel, morning and evening …  All the scholars shall, at sunset in the evening preceding the Lord’s Day, lay aside all their diversions and … it is enjoined upon every scholar carefully at apply himself to the duties of religion on said day.”

Samuel Langdon was a colonial chaplain and pastor before being chosen as President of Harvard in 1776. In an Election Day address, May 31, 1775, Harvard President Samuel Langdon spoke to the Massachusetts Provincial Congress:

“We have rebelled against God. We have lost the true spirit of Christianity, though we retain the outward profession and form of it. We have neglected and set light by the glorious Gospel of our Lord Jesus Christ and His holy commands and institutions.  The worship of many is but mere compliment to the Deity, while their hearts are far from Him. By many, the Gospel is corrupted into a superficial system of moral philosophy, little better than ancient Platonism …

My brethren, let us repent and implore the divine mercy. Let us amend our ways and our doings, reform everything that has been provoking the Most High, and thus endeavor to obtain the gracious interpositions of providence for our deliverance …

May the Lord hear us in this day of trouble …We will rejoice in His salvation, and in the name of our God, we will set up our banners! …”

Langdon continued: “Wherefore is all this evil upon us? Is it not because we have forsaken the Lord? Can we say we are innocent of crimes against God? No, surely it becomes us to humble ourselves under His mighty hand, that He may exalt us in due time …

My brethren, let us repent and implore the divine mercy. Let us amend our ways and our doings, reform everything that has been provoking the Most High, and thus endeavor to obtain the gracious interpositions of Providence for our deliverance …”

Harvard President Langdon concluded: “If God be for us, who can be against us? The enemy has reproached us for calling on His name and professing our trust in Him.

They have made a mock of our solemn fasts and every appearance of serious Christianity in the land … May our land be purged from all its sins! Then the Lord will be our refuge and our strength, a very present help in trouble, and we will have no reason to be afraid, though thousands of enemies set themselves against us round about.

May the Lord hear us in this day of trouble … We will rejoice in His salvation, and in the name of our God, we will set up our banners.”

After being President of Harvard, Samuel Langdon was a delegate to the New Hampshire Convention which ratified the United States Constitution in 1788. Samuel Langdon gave an address “The Republic of the Israelites an Example to the American States”:

“The Israelites may be considered as a pattern to the world in all ages, and from them we may learn what will exalt our character, and what will depress and bring us to ruin. Let us therefore look over their constitution and laws, enquire into their practice, and observe how their prosperity … depended on their strict observance of the divine commands both as to their government and religion.”