“On Sunday’s season finale of I Am Cait, the emotional and spiritual journey of Caitlyn Jenner reached its peak on the E! Television Network. She clashed with ex-wife Kris, but found a higher power.” – The Hollywood Gossip 9-14-2015

Notice that Transgendered Bruce/Caitlyn Jenner waited until the season finale of “I Am Cait” to “find a higher power”, God! Since the entire purpose of this charade is to spiritually deceive people, this tactic makes a great deal of sense.

First, the season finale addressed the issue of Bruce/Caitlyn and his/her ex-wife. 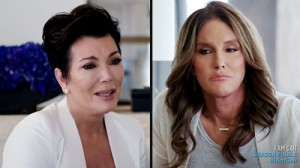 “Whereas last week was a mere tease of the Kris-Caitlyn showdown, I Am Cait Season 1 Episode 8 was the main event. It didn’t disappoint. The long and short of it: Kris is (angry) about the content of Caitlyn’s landmark Vanity Fair article, while Cait feels that Kris abandoned her.”

But, now we learn that God loves and accepts even the transgendered.

“If you watch I Am Cait, you’ve seen Caitlyn struggle at times to get to know the LGBT community and what its members are all about. Ironically, Cait is the best known transgender person in the world, despite being one of the newest, and most unique – almost an outsider. In her defense, it’s inherently complicated. Spirituality and religion are complex issues that many in the community can’t come to grips with. Activist Allyson Robinson, who is both deeply religious and trans, looks at religion and God not as enemies, as some might think they are. ‘God doesn’t love us in spite of who we are, God loves us because of who we are’, she says of the support system she hopes they will find.”

How many millions of LGBT crowd found false solace in this affirmation that God accepts the homosexual lifestyle? Members of the “LGBT community” had better watch out, because they are being spiritually deceived, to their eternal torment. Listen to these Biblical warnings:

“Let no one delude and deceive you with empty excuses and groundless arguments for these sins, for through these things the wrath of God comes upon the sons of rebellion and disobedience.” (Ephesians 5:6 Parallel Bible, KJV/Amplified Bible Commentary)

“Do not be deceived and deluded and misled; God will not allow Himself to be sneered at, scorned, disdained, or mocked by mere pretensions or professions, or by His precepts being set aside. He inevitably deludes himself who attempts to delude God. For whatever a man sows, that and that only is what he will reap.” (Galatians 6:7; Parallel Bible, KJV/Amplified Bible Commentary)

This claim made on the “I Am Cait” show, that God accepts the transgendered lifestyle, is “mere pretensions or professions”. As Ephesians 5:6 warned, do not allow yourself to be “deluded or deceived by empty excuses and groundless arguments for these sins!”, the responsibility to avoid being deceived falls ultimately upon the individual sinner.

Listen now to the ultimate Biblical warning against the LGBT sin:

Since a person will either go to eternal Heaven or eternal Hell, this last verse strongly warns that people guilty of these sins will go to eternal Hell. Now, can you understand the agony of the Apostle Paul as he warns, “Let no one delude and deceive you with empty excuses and groundless arguments for these sins…”