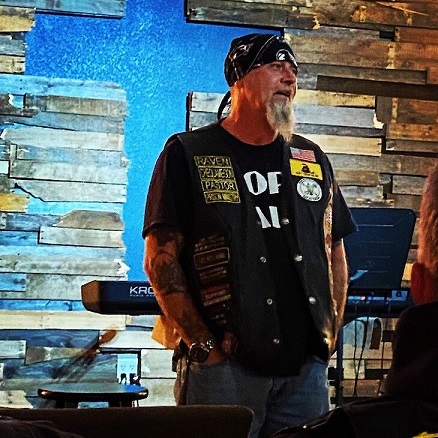 In fact, he hated God so much, he even got a tattoo on the bottom of his foot so he could “stomp on God” every time he walked. But as he sat one day in his prison cell, he received a book that changed his life – and then he met Jesus for the first time.

Brian recalls the difficult life he led – feeling unwanted and unaccepted until a group of teen boys “welcomed him in.” It was only then that he learned they were Satanists, involved in dark practices like animal sacrifice and the occult. Brian thought he could just be friends with them and not take their theology “personally” – but before he knew it, his conscience was seared, and he began to participate willingly in acts of darkness.

Faithwire reported: “One of the first rituals I was in, they were going to sacrifice a squirrel. I told them I would not do that,” he said, noting that he had always loved animals. “They said, ‘Well, [Satan] demands blood, so you’re going to have to cut yourself,’ so I did. And that ended up being an addiction for 33 years — the cutting and self-mutilation.”

He lived a life of crime, in and out of prison, hating his life so much he wanted to die. But then one day, Brian recalls he found the book “The Case for Christ” by Lee Strobel randomly in his prison cell. Strobel’s book writes of his own personal journey of being an atheist who went from denying God to becoming a devoted follower of Jesus Christ. And once Brian finished reading Strobel’s book – suddenly everything clicked and he knew Jesus was real.

“When I got done with that book, I could no longer deny the fact that Jesus existed on this earth,” he said. “All my life I had sought truth.” Praise God!

Brian’s testimony is yet another example of how the light is stronger than darkness, and how God can reach even the hardest of hearts. Satan seeks to kill and destroy, and his main mission is to separate people from God, causing them to believe lies and doubt the goodness of God.

But as Jesus tells us in John 8:32 “You will know the truth, and the truth will set you free.” What’s even more incredible, is not only was Brian Cole set free from the snares of the enemy by the grace and blood of Jesus Christ – but he actually went on to become a pastor and is helping others find Jesus!

No one is too far gone to receive the supernatural, life-changing power of making Jesus Lord of their life. Praise God for His grace in Brian’s life, and we wish him well as he now enjoys living as a new creation in Christ!

“For God so loved the world, that he gave his only Son, that whoever believes in him should not perish but have eternal life.  For God did not send his Son into the world to condemn the world, but in order that the world might be saved through him.” – John 3:16-17