Here Is The Real Story Of Independence Day 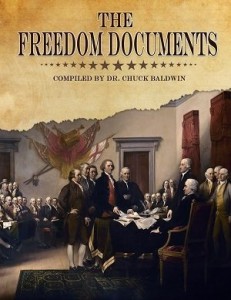 For many Americans, Independence Day (July 4th) is merely a day off work and an opportunity to party or have a barbeque—and maybe watch a parade or fireworks. Because most schools and churches do not teach real American history anymore, most Americans know very little about the principles that birthed this great country. Most have never read the great documents that explain the hearts and minds of America’s founders. To remedy this problem, we have produced the greatest compilation of America’s most important historical documents in one volume under one title. We call this fantastic compilation THE FREEDOM DOCUMENTS.

I am truly excited about this brand new and expanded edition of THE FREEDOM DOCUMENTS. The documents we have added make this volume a perfect compilation of the most important documents of liberty and constitutional government ever produced.

Here is the list of the documents we have added to the original version:

*The Earliest Formal Protest Against Slavery—February 18, 1688

*Dr. Joseph Warren’s Account Of The Battle Of Lexington—April 26, 1775

*Of Monarchy And Hereditary Succession, From “Common Sense,” By Thomas Paine—February 14, 1776

*Declaration Of The People Of Texas—November 7, 1835

*General “Stonewall” Jackson’s “You Are The First Brigade” Speech—November 4, 1861

*Abortion And The Conscience Of The Nation, By Ronald Reagan—February 3, 1983

Of course, documents such as The Mayflower Compact, The First Thanksgiving Proclamation, the complete text of Patrick Henry’s immortal “Give Me Liberty, Or Give Me Death” speech, The Declaration Of The Causes And Necessity Of Taking Up Arms, The Northwest Ordinance Of 1787, George Washington’s Farewell Address, etc., are still included in the giant compilation.

The poem about Paul Revere’s ride and the letter written from within the Alamo by William Barret Travis to the people of Texas remain in the book, along with, of course, the Declaration Of Independence, U.S. Constitution and Bill Of Rights. We have also expanded the number of letters written between John and Abigail Adams and the prayers of George Washington—along with several other documents.

Now, more than ever, these historic documents contain the Spirit and Pride of America.

This unique compilation of America’s greatest documents is available nowhere else that we know of. It is an excellent resource for high school and college students—as well as homeschoolers. Pastors, teachers, attorneys and judges have purchased THE FREEDOM DOCUMENTS with extreme satisfaction. The Tennessee State Supreme Court also ordered several copies of the original FREEDOM DOCUMENTS. I believe you will be just as pleased as they are with this wonderful compilation of American documents.

You can have these great documents at your fingertips in one beautifully bound, easy-to-read format. These are the documents that gave birth to the greatest free nation on earth. Again, nowhere else that we know of can you find these documents complete in one volume under one title. This compilation of documents is available only here; and our supply is very limited and will not last long.

Again, this is the FIRST-EVER NEW AND EXPANDED FREEDOM DOCUMENTS.

More than ever, this volume is must-reading for every American patriot. For the price of two or three Chicago pizzas or one family night at the movies, you can have the great documents of American history delivered to your door.

Simply mail your check or money order to:

The founder of the Constitution Party and three-time presidential candidate, the late Howard Phillips, said, “THE FREEDOM DOCUMENTS is must-reading for every American. It is essential that this volume be placed in every home in the country. I read my copy daily. We require our homeschooled children to study THE FREEDOM DOCUMENTS.”