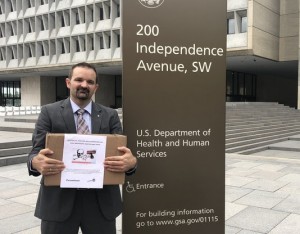 ALPHARETTA, Ga. — On September 24th, the Department of Health and Human Services (HHS) announced that it terminated the contract between the FDA and Advance Bioscience Resources (ABR), which allocated taxpayer money to purchase “fresh” aborted fetal body parts for experimentation. As part of the groundswell of opposition that rose up from exposure of this relationship, Personhood Alliance and Citizen Go hand-delivered nearly 16,500 petition signatures to key leaders in DC and sent 18,000 emails directly to HHS Secretary Alex Azar.

In an official statement, the HHS announced the contract termination as a first step and promised to:

~ Audit all of its current contracts with other vendors

This decision comes on the heels of Congressional Republicans’ use of the defense spending bill to continue to fund aborted fetal research through the National Institutes of Health-almost $100 million taxpayer dollars per year. While HHS can control contracts and regulations, Congress is ultimately responsible for the legalization and funding of aborted fetal research.

“The 18,000 personhood supporters who signed our petition rejoice at the bold action taken by the administration and demand that Congress start doing its part to defend life,” says Gualberto Garcia Jones, VP and National Policy Director of Personhood Alliance. “It is unacceptable for Congress to continue rubber-stamping the Democrats’ agenda. If Republicans want the pro-life vote,” warns Jones, “They’ll have to earn it. If not, good riddance in November.”