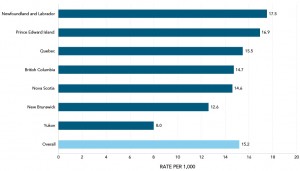 (NaturalHealth365) Autism rates continue to surge worldwide, especially within “developed” countries with robust (conventional) healthcare systems. For example, Canada is a fully “developed” country, with around 1 in 66 children afflicted with autism as of comprehensive reports from 2015. This puts Canada in the top 10 countries in the Americas, Europe and Asia with the highest autism rates. (The U.S. is no better)

The Public Health Agency of Canada is set to release first-ever nationally representative data related to autism spectrum disorder (ASD) since the year 2016. It comes from the National ASD Surveillance System (NASS), which is intended to pinpoint how many young people are diagnosed with ASD both over time and across regions.

The Agency’s report shows both notable differences across regions and steady increases in ASD prevalence since 2003. However, the document doesn’t speculate on the factors that might account for the regional differences.

So, what explains why some Canadian regions have markedly higher rates of autism than others? It turns out the prevalence of autism is highest in areas where vaccine rates are highest.

The Canadian NASS compiles administrative data related to education, health and social services for children age 5 to 17 years with a confirmed autism diagnosis. Seven of the 13 Canadian territories and provinces provided information for 2015.

Autism rates varied, with the highest prevalence in Newfoundland and Labrador, Prince Edward Island and Quebec. Rates in the Yukon territory were substantially lower, correlating with lower vaccination rates.

There were also sizeable jumps in autism from 2003 in the six to 12 years following, with anywhere from a 227 percent increase to a 349 percent increase in autism rates in a very short period of time. Again, there is clearly a link between these rates and an increase in the administering of vaccinations in these areas.

The evidence related to vaccine coverage is from a 2013 survey from the Public Health Agency of Canada – which tracks province/territory and vaccines given.

While “correlation is not causation,” this certainly seems like more than a coincidence.

Additional evidence includes tens of thousands of parental reports of normal, healthy children suddenly regressing into autism after receiving a vaccine. Sadly, Canadian parents with vaccine-injured children have nowhere to turn, as Canada still denies the reality of vaccine injuries.

And, unlike the court system in the United States, there is no available (legal) option to be compensated for victims and their families in Canada. (of course, the U.S. legal system tends to favor the pharmaceutical industry – most of the time – for obvious reasons)

Vaccine side effects like autism have become an epidemic worldwide

As evidence like this continues to be released in Canada and countries across the world, it’s time to sound the alarm. We must face reality about the vaccine side effects that’s afflicting so many children and placing tremendous stress on families throughout the world.

Genetic factors, environmental toxicity issues and nutritional deficiencies must be addressed to reduce the risk of neurological disorders or any other chronic disease condition.

Whether you suspect a nefarious agenda by the pharmaceutical industry and the interests behind them or believe it’s just gross medical (and political) negligence, this problem must be resolved.  The future of humanity depends on it.