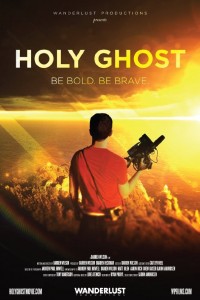 By deploying a new consumer-driven strategy that will fundamentally change the way entertainment is distributed, Wanderlust Productions is banking on technology-savvy Millennials to drive the demand for-and the success of-HOLY GHOST.

“HOLY GHOST is a film without boundaries, we shot it without a script or a plan. It’s a film about the freedom and unexpected adventure that comes with a life led by the Spirit of God. This fresh vision, a stark contrast to the traditional understanding of the church, is strongly resonating with young people,” said Darren Wilson, director of HOLY GHOST.

“As we travel the world with HOLY GHOST in places like the U.K. and Australia, thousands of Millennials have flooded to our screenings and told us the film has changed their lives. They are the enthusiastic audience behind our success, and an underserved segment in the booming faith-based entertainment market.”

A significant percentage of Advance Premier participants watched HOLY GHOST more than once.

Rather than pursuing a traditional theatrical or direct-to-home entertainment release, Wanderlust Productions is staging a one-time, World Premiere Experience on September 6th during which fans from all over the world will have the opportunity to view HOLY GHOST directly on any digital device, free of charge. Wanderlust believes that the one-time, 48-hour event will attract viewers from all over the world, drive subsequent VOD and DVD purchases, and result in strong profitability for the project. This will enable instant reinvestment in the next project, due out in the fall of 2015.
If you’d like to see the movie locally, on Friday, September 26th at 7pm Word of Life Covenant Church, located at 1308 Phenix Ave. in Cranston, RI will be showing the movie for free. Bring your friends and family to see a film that attempts to capture the power, mystery, artistry, and character of the Holy Spirit through incredible God encounters around the world.

To learn more about HOLY GHOST and to view the trailer, visit holyghost.wpfilm.com. For more information about the local showing of the movie visit www.WORDOFLIFERI.com or call 401-944-1163.