CHARLOTTE, N.C. – Apologia is excited to have partnered with Burns Family Studios on the successful April release of Beyond the Mask, created by homeschool alumni Aaron and Chad Burns. More than 70,000 moviegoers turned out to see the film in its Gathr opening, smashing the record for a theatrical on-demand release. 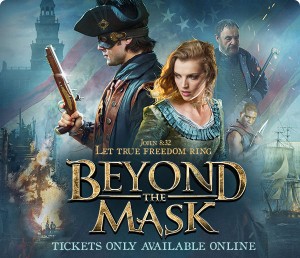 The record-breaking opening captured the attention of major film distributors, and the film was recently acquired by Freestyle Releasing, distributors of the wildly successful 2014 film God’s Not Dead.

Beyond the Mask is scheduled for a traditional release in select theaters on June 5, 2015.

“When we partnered with Burns Family Studios last month to promote the release of their new film we had no idea what to expect. But we knew it was an endeavor we wanted to support and to rally our homeschooling community around,” says Davis Carman, president of Apologia Educational Ministries.

Join us in celebrating this victory in the promotion of Christ-centered, family-friendly entertainment. Plan to see Beyond the Mask in theaters June 5.