How Long Will We Pretend Palestinians Aren’t People? 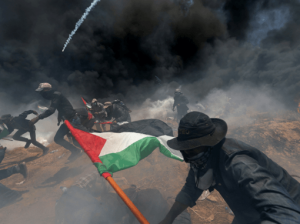 Monstrous. Frightful. Wicked. It’s strange how the words just run out in the Middle East today. Sixty Palestinians dead. In one day. Two thousand four hundred wounded, more than half by live fire. In one day. The figures are an outrage, a turning away from morality, a disgrace for any army to create.

And we are supposed to believe that the Israeli army is one of “purity of arms”? And we have to ask another question. If it’s 60 Palestinians dead in a day this week, what if it’s 600 next week? Or 6,000 next month? Israel’s bleak excuses – and America’s crude response – raise this very question. If we can now accept a massacre on this scale, how far can our immune system go in the days and weeks and months to come?

Yes, we know all the excuses. Hamas – corrupt, cynical, no “purity” there – was behind the Gaza demonstrations. Some of the protestors were violent, sent burning kites – kites, for heaven’s sake – across the border, others threw stones; though since when has stone-throwing been a capital offence in any civilized country? If an eight-month old baby dies after tear gas inhalation, what were her parents doing bringing their infant child to the Gaza border? And so it goes on. Why complain about dead Palestinians when we have the Sissis in Egypt and the Assads in Syria and the Saudis in Yemen to contend with? But no, the Palestinians must always be guilty.

The victims are themselves the culprits. This is exactly what the Palestinians have had to endure for 70 years. Remember how they were to blame for their own exodus seven decades ago, because they followed the instructions of radio stations to leave their homes until the Jews of Israel were “driven into the sea”. Only of course, the radio broadcasts never existed. We still must thank Israel’s “new historians” for proving this. The broadcasts were a myth, part of Israel’s foundational national history invented to ensure that the new state – far from being founded on the ruins of others’ homes – was a land without people.

And it was a marvel to behold the way in which the same old reporting cowardice began to infect the media’s account of what happened in Gaza. CNN called the Israeli killings a “crackdown”.

References to the tragedy of the Palestinians in many news media referred to their “displacement” 70 years ago – as if they happened to be on holiday at the time of the “Nakba” – the catastrophe, as it’s known – and just couldn’t make it home again. The word to use should have been perfectly clear: dispossession. Because that is what happened to the Palestinians all those years ago and what is still happening in the West Bank – today, as you read this – courtesy of men like Jared Kushner, Donald Trump’s son-in-law, a supporter of these wretched and illegal colonies built on Arab lands and appropriated from Arabs who have owned and lived on the land for generations.

And so we come to the most ghastly of all fateful events last week: the simultaneous bloodbath in Gaza and the glorious opening of the new US embassy in Jerusalem.

“It’s a great day for peace,” Israel’s prime minister, Benjamin Netanyahu, announced. When I heard that, I wondered if my hearing was defective. Did he actually say those words? Alas, he did. At times like this, it is an immense relief to find that journals like the Israeli daily Haaretz maintain their sense of honour. And the most remarkable piece of reportage came in The New York Times where Michelle Goldberg caught perfectly the horror of both Gaza and the embassy opening in Jerusalem.

The latter, she wrote, was “grotesque… a consummation of the cynical alliance between hawkish Jews and Zionist evangelicals who believe that the return of Jews to Israel will usher in the apocalypse and the return of Christ, after which Jews who don’t convert will burn forever.” Goldberg pointed out that Robert Jeffress, a Dallas pastor, gave the opening prayer at the embassy ceremony.

And Jeffress it was who once claimed that religions like “Mormonism, Islam, Judaism, Hinduism” lead people “to an eternity of separation from God in hell”. The closing benediction came from John Hagee, an end-times preacher who, Goldberg recalled, once said that Hitler was sent by God to drive the Jews to their ancestral homeland.

Of Gaza, she added: “even if you completely dismiss the Palestinian right of return – which I find harder to do now that Israel has all but abandoned the possibility of a Palestinian state – it hardly excuses the Israeli military’s disproportionate violence.” I’m not so sure, though, that Democrats have become more emboldened to discuss Israeli occupation, as she thinks. But I think she’s right when she says that as long as Trump is president, “it may be that Israel can kill Palestinians, demolish their homes and appropriate their land with impunity”.

Rarely in modern times have we come across an entire people – the Palestinians – treated as a non-people. Amid the trash and rats of the Sabra and Chatila refugee camps in Lebanon – oh fateful names they remain – there is a hut-museum of items brought into Lebanon from Galilee by those first refugees of the late 1940s: coffee pots and front door keys to houses long destroyed. They locked up their houses, many of them, planning to return in a few days.

But they are dying fast, that generation, like the dead of the Second World War. Even in the oral archives of the Palestinian expulsion (at least 800 survivors are recorded) organised in the American University of Beirut, they are finding that many whose voices were recorded in the late 1990s have since died.

So will they go home? Will they “return”? That, I suspect, is Israel’s greatest fear, not because there are homes to “return” to, but because there are millions of Palestinians who claim their right – under UN resolutions – and who might turn up in their tens of thousands at the border fence in Gaza next time.

How many snipers will Israel need then? And of course, there are the pitiful ironies. For there are families in Gaza whose grandfathers and grandmothers were driven from their homes less than a mile from Gaza itself, from two villages which existed precisely where stands today the Israeli town of Sderot, so often rocketed by Hamas. They can still see their lands. And when you can see your land, you want to go home.