How One Small Town Stood Up Against Transgender Activists – And Won 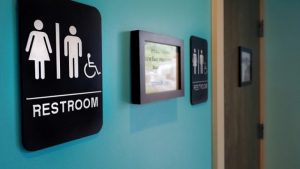 In a society that’s rapidly moving toward complete acceptance of the transgender movement, bathrooms are the next stop. Rather than dividing bathrooms by biological sex, transgender activists want to allow anyone who “identifies” as a specific gender to use that gender’s restroom facilities.

It’s a fad that’s spreading rapidly across the country, much to the detriment of comfort and safety for many. But one town in Georgia recently stood up for traditional values and reversed a transgender bathroom decision in their community. In the small town of Jasper, Georgia, Pickens High School is the location of the latest round of transgender activism.

Because one student at the high school identifies as transgender, the entire school was forced to change its bathroom policy.  Anyone who claimed to identify as male could access the boys’ restroom, and anyone who claimed to identify as female could access the girls’ restroom. Transgender activists hailed this as a massive step forward for equality and justice.  But students at Pickens High School and their parents knew it wasn’t helping anyone.

When a large portion of the Jasper community came to the high school auditorium to protest “the march for transgender bathrooms,” the school board couldn’t help but pay attention. “Most people won’t say anything because they fear retaliation,” said Nathan Barfield, one concerned father.  He knew that the natural idea of dividing bathrooms by biological gender is rapidly becoming unpopular. But he also knew that his two children, both of whom attended Pickens High School, were growing increasingly uncomfortable because of the new transgender bathroom policy.

“Why, Barfield asked, should the entire student body be subjected to an illogical and potentially dangerous policy because of the wishes of one or two “transgender” students? Accommodations have already been made for transgender students,” Barfield argued, pointing out that single-person restrooms were already in place in the school.  “This is nothing but a political stunt to gain attention.”

Most of the other townspeople agreed with Barfield, urging the school board to reconsider its policy on bathrooms in light of the concerns and complaints of Pickens High School students. “Once you give into this, you’ll open the floodgates,” warned one mother in the crowd.

Other countries that have already fully implemented transgender bathroom policies are seeing the repercussions of opening the floodgates on this issue. In the U.K., for example, schoolchildren are reporting intense anxiety in relation to bathroom use at their schools.  Some girls prefer to stay home from school rather than share their bathrooms with biological boys, while other students cope with the issue by waiting to use the bathroom at home or just not drinking water.

This isn’t healthy for anyone, and even liberal parents around the world recognize that this “bathroom crisis” is affecting their children for the worse. “This is not a Pickens County issue,” admitted an official from Pickens High School.  “It’s not a north Georgia issue, or even a southern issue.  This is a national issue.”

He continued, “It’s ripping apart the very fabric of public education, making it virtually impossible for schools to do what they’re supposed to: educating our children.”

He’s right – when transgender issues become the focus of school policy, education falls by the wayside.  By and large, students aren’t benefitted by policies that focus on the desires of one or two students at the expense of everyone else.

When students feel uncomfortable or unsafe at their school, they can’t focus on learning what they need to.  All that the parents in Jasper, Georgia were asking for was that their children be allowed to learn in a safe and supportive environment.

When faced with the crowd of concerned parents, the superintendent of the high school, Carlton Wilson, agreed to reverse the transgender bathroom policy.  From now on, the school’s few transgender students can use the single-person, gender-neutral bathrooms. It’s a common-sense solution that protects everyone, and the parents and students of Jasper hope it will stay in place. But they’re ready to keep standing against the tide of transgender activism if need be.

As more communities around the country face these kinds of policies and decisions, it’s important to keep praying for our nation.  It’s also crucial to know how to be prepared for the onslaught of transgender activism in our own communities.