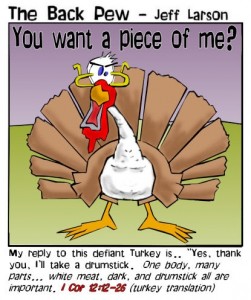 A man and his ten-year-old son were on a fishing trip miles from home. Being good Christians they decided to attend the Sunday worship service at a small rural church. The father forgot to bring any cash, so he reached in his pocket and gave his son a dime to drop in the offering plate as it was passed. As they walked back to their car after the service, the father complained. “The service was too long,” he lamented. “The sermon was boring, and the singing was off-key.” Finally the boy said with a grin, “Dad, I thought it was pretty good for a dime.”

A priest was invited to attend a house party. Naturally, he was properly dressed and wearing his priest’s collar. A little boy kept staring at him the entire evening. Finally, the priest asked the little boy what he was staring at. The little boy pointed to the priest’s neck. When the priest finally realized what the boy was pointing at, he asked him, “Do you know why I am wearing that?” The boy nodded his head yes, and replied, “It kills fleas and ticks for up to three months.”

THE FIRST CHURCH OF FOOTBALL

In a never-ending effort to attract the unchurched, some churches have considered translating their unfamiliar terminology into familiar football phrases:

ILLEGAL CONTACT: What gets some church leaders into trouble and out of the ministry.

ILLEGAL MOTION: Leaving before the benediction.

INTERFERENCE: Talking during the organ prelude.

PASS: When the new couple says no.

PASS INTERFERENCE: 1. Single male usher spots single woman in audience. 2. A parent moving between two teens in the pew to halt the flow of notes back and forth during the sermon.

QUARTERBACK SNEAK: 1. How the pastor gets from the pulpit to the rear door during the benediction.

RED DOG: Common strategy performed each Sunday by those who “own” their own pew.

SUDDEN DEATH: The penalty to the pastor who preaches more than 25 minutes.

TACKLE: 1. What happens to the only eligible bachelor at the 35-and-over singles enrichment retreat.

TWO-MINUTE WARNING: The pastor’s wife looking at her watch in full view of the pastor.

UNSPORTSMANLIKE CONDUCT: Usually takes place at a committee meeting to decide on the color of carpet or some other thing.

Faithful till the end

A pious man, who had reached the age of 105, suddenly stopped going to synagogue. Alarmed by the old fellow’s absence after so many years of faithful attendance, the Rabbi went to see him. He found him in excellent health, so the Rabbi asked, “How come after all these years we don’t see you at services anymore?” The old man lowered his voice. “I’ll tell you, Rabbi,” he whispered, “When I got to be 90, I expected God to take me any day. But then I got to be 95, then 100, then 105. So, I figured that God is very busy and must’ve forgotten about me, and I don’t want to remind Him!”

Howard dragged himself into his doctor’s office one day looking very exhausted. “Doctor Kane,” he said, “there are dogs all over my neighborhood. They bark all day and all night, and I can’t get a wink of sleep!”

“I have good news for you, Howard,” Doctor Kane said, rummaging through a drawer full of sample medications. “Here are some new sleeping pills that were just approved. They work like a dream. Just a few of these and your troubles will be over.” “Great,” said Howard, “I’ll try anything. Let’s give it a shot.”

Dr. Kane gave him the pills. Howard thanked him and left. Two weeks later, Howard came back to Dr. Kane’s office looking worse than ever. “Doc, your plan is no good. I’m more tired than ever!” Howard exclaimed. “I don’t understand how that could be,” said Dr. Kane, shaking his head. “Those are the strongest pills on the market!” “That may be true,” answered Howard wearily, “but I’m still up all night chasing those dogs and when I finally catch one, it’s really hard getting him to swallow the pill!”

I’m absolutely convinced the socks that go missing from the dryer turn into extra Tupperware lids. Old age is coming at a really bad time! We didn’t lose the game; we just ran out of time. The biggest lie I tell myself is “I don’t need to write that down, I’ll remember it.” Warning: Dates on calendar are closer than they appear. Wealthy people miss one of life’s greatest thrills: Making the last car payment. When the going gets tough, everyone leaves. What hair color do they put on the driver’s license of a bald man? You fall the way you lean. Funny, but I can’t name a business that’s like show business. How come, no matter what color bubble bath you use, the bubbles are always white?

Advice is like castor oil – easy enough to give, but dreadfully uneasy to take. All I want is a chance to prove that winning the lottery won’t solve all my problems. Why do banks charge you a “non-sufficient funds fee” on money they already know you don’t have? The voices in my head may not be real, but they have some good ideas! Background and circumstances may influence who we are, but we are responsible for who we become.

When one of us is threatened, we are all at risk. We are all involved in this journey called life. We must keep an eye out for one another and make an extra effort to encourage one another.

How bad a mistake can you make on your resume? Here are some real-life examples:

~ “I have become completely paranoid, trusting completely nothing and absolutely no one.” ~ “References: None, I’ve left a path of destruction behind me.” ~ “Strengths: Ability to meet deadlines while maintaining composer.”

~ “Don’t take the comments of my former employer too seriously, they were unappreciative beggars and slave drivers.” ~ “My goal is to be a meteorologist. But since I possess no training in meteorology, I suppose I should try stock brokerage.” ~ “I procrastinate–especially when the task is unpleasant.” ~ “I am loyal to my employer at all costs…Please feel free to respond to my resume on my office voicemail.” ~ “Qualifications: No education or experience.” ~ “Disposed of $2.5 billion in assets.” ~ “Accomplishments: Oversight of entire department.” ~ “Extensive background in accounting. I can also stand on my head!” ~ Cover letter: “Thank you for your consideration. Hope to hear from you shorty!”