By J. D. Heyes
(NaturalNews) As socialist government deepens in Venezuela, economic conditions continue to worsen for the Venezuelan people — and the government leaders continue to deny that their policies are to blame.

So bad, now, is the economy that the government has deployed the military — the military — to ensure that anxious, hungry and needy citizens don’t over-indulge at stores (when they actually have merchandise and food, which is increasingly rare).

As reported by Bloomberg News recently, shoppers mobbed grocery stores in the capital of Caracas amid ongoing, worsening food and commodities shortages, leading the government to place food distribution under military control.

Bloomberg News further reported on conditions in the capital city: Long lines, some stretching for blocks, formed outside grocery stores in the South American country’s capital as residents search for scarce basic items such as detergent and chicken.

“I’ve visited six stores already today looking for detergent — I can’t find it anywhere,” Lisbeth Elsa, a 27-year-old janitor, told the news service while waiting in line outside a supermarket in eastern Caracas. “We’re wearing our dirty clothes again because we can’t find it. At this point I’ll buy whatever I can find.”

Pictures of near-empty store shelves tell the story of the worsening economic crisis in the South American nation.
A combination of economic factors has all contributed to Venezuela’s disintegration — a lack of foreign capital and declining oil prices among them — but the country’s socialist economic policies are at the root of every problem.

There are shortages of virtually everything, from car batteries to toilet paper — even McDonald’s french fries. Annual inflation rose to 64 percent in November.

Luis Vicente Leon, director of Caracas-based polling agency Datanalisis, told Bloomberg News in a phone interview that long lines and short supplies will continue into the future as long as government-imposed price controls remain in place.

In recent days, government officials met with supermarket chain representatives to guarantee supplies, according to state news agency AVN. And Interior Minister Carmen Melendez told news agencies that “security forces” would be sent to monitor grocery stores and food distribution centers to “protect shoppers” — though many observers believe that troops have been sent to prevent people from stocking up on whatever they can find. 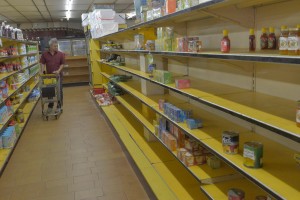 CARACAS, VENEZUELA – JANUARY 13: A shopper walks past nearly empty shelves at a supermarket due to a long term shortage in Caracas, Venezuela on January 13, 2015. Sliding oil prices have sent Venezuela on a downward spiral and sent President Nicolas Maduro on a trip to China to make an urgent appeal for cash. Country’s economic woes have triggered severe shortages of some staple product, with government-controlled supermarkets now limiting the amount of certain products customers can purchase. (Photo by Carlos Becerra/Anadolu Agency/Getty Images)

Meanwhile, government lies and propaganda continued. “Don’t fall into desperation — we have the capacity and products for everyone, with calmness and patience. The stores are full,” Melendez said on state television.

Venezuelan President Nicolas Maduro, who succeeded the late Hugo Chavez, “father” of the current socialist revolution, has promised to implement an economic “counter-offensive” to lead the nation out of its deepening recession, including a revamping of the foreign exchange system, but so far he has not provided details, Bloomberg News reported. The main government-controlled exchange rate is 6.3 bolivars per U.S. dollar, but the black market rate is as high as 187 per dollar.

Inside a Plan Suarez grocery store [last week] in eastern Caracas, shelves were mostly bare. Customers struggled and fought for items at times, with many trying to skip lines. The most sought-after products included detergent, with customers waiting in line for two to three hours to buy a maximum of two bags. A security guard asked that photos of empty shelves not be taken. [emphasis added]

And police officers stationed inside a Luvebras supermarket in the same part of the city took part in helping store staff distribute toilet paper and additional products.

“You can’t find anything, I’ve spent 15 days looking for diapers,” Jean Paul Mate, a meat vendor, told Bloomberg outside the Luvebras store. “You have to take off work to look for products. I go to at least five stores a day.”

“This is the worst it has ever been — I’ve seen lines thousands of people long,” Greisly Jarpe, a 42-year-old data analyst, said while waiting for dish soap in eastern Caracas. “People are so desperate they’re sleeping in the lines.”