Imprisoned Pastor Andrew Brunson Remanded Back to Prison Until October

Secret Witnesses to Testify Against him at that time

IZMIR, TURKEY (ANS) — Pastor Andrew Brunson, an American pastor who has pastored and served in Izmir Turkey for the last 23 years, is facing 35 years in prison. Brunson has been in prison since October 2016 on nefarious charges and third-hand false witnesses.

The Rev. William Devlin, a pastor of Infinity Bible Church in the South Bronx in NYC and CEO of REDEEM! 501(c) 3, a non-profit organization registered in the USA that advocates for imprisoned people of faith around the world, is in Izmir and attended the Wednesday, July 18 hearing.

Devlin told ASSIST News the presiding judge in Brunson’s third hearing remanded Pastor Brunson back to prison until the next hearing on October 12, 2018.

Devlin said: “On that day, he will be four days shy of spending two years in a Turkish prison under nefarious charges and false testimony from multiple witnesses. All of us advocating for Pastor Brunson are deeply discouraged at the continued action of the Turkish Court in Izmir.”

Devlin stated that Brunson’s Turkish attorney argued today there is no reason for Pastor Brunson to continue to be held as a prisoner — he should be allowed to go free and the case continued. 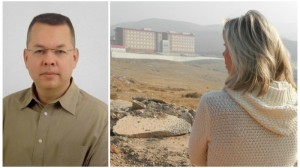 According to Hurriyet Daily News (http://www.hurriyetdailynews.com) the Second High Penal Court in İzmir decided to continue listening to the testimonies of witnesses in the next hearing on Oct. 12.

Brunson, a Christian pastor from North Carolina, who has lived in Turkey for more than two decades, was indicted on charges of having links with the Fethullahist Terror Organization (FETÖ) that Ankara blames for the failed 2016 coup attempt, as well the outlawed Kurdistan Workers’ Party (PKK).

He was detained nearly two years ago and faces up to 35 years in prison if found guilty. Brunson denied the charges, calling them “shameful and disgusting.”

President Donald Trump has called for his release and the U.S. Senate passed a bill last month including a measure that prohibits Turkey from buying F-35 Joint Strike Fighter jets because of Brunson’s imprisonment and Turkey’s purchase of Russia’s S-400 air defense system.

Hurriyet Daily News went on to report Philip Kosnett, U.S. charge d’affaires in Turkey, told reporters outside the courtroom before the hearing began that Brunson’s case was a critical one for the United States and had ramifications for its relationship with Turkey.

“The sooner Andrew Brunson can be reunited with his family the sooner we can start focusing on other issues in the relationship,” he said.

Following the hearing, Kosnett expressed his disappointment. “I’ve read the indictment, I’ve attended three hearings. I don’t believe that there is any indication that Pastor Brunson is guilty of any sort of criminal or terrorist activity,” he said.

“Our government remains deeply concerned about his status, as well as the status of other American citizens and Turkish local employees of the U.S. diplomatic mission who have been detained under state of emergency rules. We have great respect both for Turkey’s traditional law as a haven for people of all faiths and for Turkey’s legal traditions. And we believe that this case is out of step with those traditions,” he said in a written statement.

Brunson was pastor of the İzmir Resurrection Church, serving a small Protestant congregation in Turkey’s third largest city, south of the Aegean town of Aliağa where he is now on trial.

The Turkish government says Brunson’s case will be decided by the courts. But President Recep Tayyip Erdoğan has previously linked his fate to that of Fethullah Gülen, the U.S.-based Muslim cleric Turkey blames for the coup attempt and whose extradition Ankara seeks.

Andrew’s wife, Norine, wrote on their joint Facebook page: “Andrew was remanded to prison until his next hearing, October 12, when two more secret witnesses, one more prisoner and at least one other witness will testify against him. I know his heart must be broken tonight, again.”

“I am incredibly proud of him as I am quite sure he doesn’t feel that blessing at this point. There have been many prayers for the legal side of things, but let’s just pray for a miraculous release.”