(WNS)–Leaders and congregants of St. Sebastian’s, a Catholic Church in India’s capital of New Delhi, blamed arson for the fire that destroyed the church last week.

According to The Times of India, the fire started in the early morning of Dec. 1 and consumed the interior of the church, including the altar, Bible, and cross. Catholic officials condemned the fire as arson, calling it a sacrilege, The Hindu reported. They expressed concern that an investigative team was slow to assess the scene.

The Delhi Catholic Archdiocese told The Hindu investigators took samples from the church that still smelled of fuel oil, which could have been used as an accelerant. But the police have not announced any progress in their investigations, Church officials said. 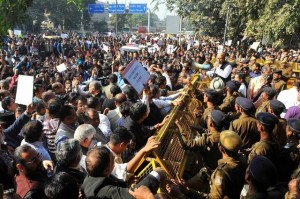 Hundreds of Christians peacefully protested outside police headquarters after the fire, calling for justice, according to the Jerusalem Post. Religious minorities have rallied together to denounce the alleged arson, including Muslim groups concerned by increased persecution of religious minorities since the Hindu nationalist Bharatiya Janata Party (BJP) came to power.

The Evangelical Fellowship of India (EFI) condemned the alleged arson. “The act of sacrilege and hate against the Christian community is carried with impunity with very often law agencies remaining silent spectators,” Richard Howell, the general secretary of EFI said in a press release. “This will dent the image of the present government within India and abroad and leave the minorities vulnerable and targets of hatred.”

On Dec. 2, the government formed a special investigations team to look into the cause of the fire, according to Outlook India.

The Christian community was suspicious about the fire because of the smell of kerosene in the church, William Stark of International Christian Concern told me. Stark, regional manager for South Asia, said one Indian Christian he spoke to expressed concern the fire is part of a “larger scheme to target and shake the entire Christian community throughout India.”

India is officially a secular country. But since Prime Minister Narendra Modi’s electoral victory, along with many other BJP candidates, religious minorities including Christians have been on edge. In the last few months, Hindu extremists have increased attacks on Christians. Several Protestant pastors were arrested on charges of forced conversion, and 50 village councils made Christian activities illegal, prompting Christians to protest in September. Most recently, Modi refused to dismiss a BJP minister who referred to non-Hindus as “children of bastards,” Reuters reported.

“I think all of the religious minorities in India will be watching very closely how the police handle this investigation and how the government responds,” said Todd Nettleton, with Voice of the Martyrs. “The priests have said, ‘We need you to come in and get our church fixed before Christmas.’”

Stark said if the police investigation leads to the arrest and conviction of those responsible for the church fire, it would go a long way toward helping India’s religious minorities feel more secure.  St. Sebastian’s in Dilshad Garden was built in 2001, and is one of the largest churches in East Delhi, according to The Hindu.