Indonesian Christians flogged outside of mosque for violating sharia law

The two Indonesian Christians – Dahlan Silitonga, 61, and Tjia Nyuk Hwa, 45 – were whipped six and seven times respectively by a masked man wearing a robe, as a crowd of 300 ridiculed and took pictures of them outside a mosque in the provincial capital, Banda Aceh.

The strict Islamic law punishment against the Christian man and woman comes as the predominently Muslim country shifts to a more radical, politicized version of Islam, Reuters reported. 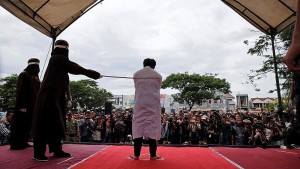 The pair – among five people punished – was accused of gambling. Police said they were playing a game at a children’s entertainment complex that lets users exchange coins for prizes or vouchers, including cash. They were beaten with a rattan stick, while another man involved with them got 19 lashes.

Another couple was whipped two dozen times for showing affection in public.

Banda Aceh is the only province in Indonesia that imposes sharia law since it was adopted in 2001 as part of a deal with the central government to end a long-running insurgency. The province has flogged its non-Muslim citizens for a range of offenses – from gambling to selling alcohol to having gay or extramarital sex.

“This is to create a deterrent effect, in order for people not to repeat violations of Islamic sharia law,” Banda Aceh’s mayor Aminullah Usman said. “We purposely do it in front of the public … so it won’t happen again.”

Indonesia is the country with the largest Muslim population in the world. Around 98% of Banda Aceh’s population are Muslims subject to sharia law, but the other portion, Christians and other non-Muslims, when accused of violating both national and religious laws can choose to be prosecuted under either system, often opting for a flogging to avoid a lengthy, costly court process and jail time.

In January, a Christian man was whipped 36 times for selling alcohol and recently the country came under fire after police arrested and publicly humiliated transgender people.

Last year, Indonesia jailed Christian governor, Basuki “Ahok” Tjahaja Purnama, for blaspheming the Koran, prompting massive protests and pushback on the country’s stance as a bulwark of tolerance and pluralism in the Islamic world.