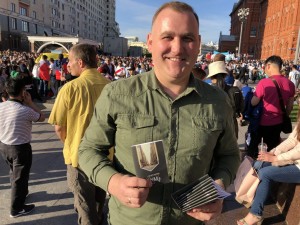 Photo: Thousands of special-edition Scriptures like this one will be distributed to Russian soccer fans by churches when they host live-broadcast screenings of the 2018 World Cup this summer, in a creative outreach being coordinated by Mission Eurasia.

WHEATON, Ill. – An innovative evangelistic outreach during this summer’s 2018 World Cup–being held in Russia for the first time in its nearly 90-year history–is set to kick off a new campaign to grow the church in the country by reaching millions of its residents.

Mission Eurasia, a U.S-based nonprofit training and equipping young Russian nationals as next generation ministry leaders, has set an unprecedented goal to pass out about 600,000 Scriptures, estimated to help 3 million sports fans during the campaign.

With missionary activity restricted by 2016 Yarovaya legislation that limits evangelism to officially recognized churches, the campaign centers on the efforts of young Russian believers equipped and positioned to share the gospel.

They will partner with hundreds of churches across the country to host big-screen live broadcasts of the soccer tournament, which runs from June 14-July 15. By providing a way for fans to watch the games, they hope for the opportunity to share the gospel with many people who might not otherwise attend church.

Central to the outreach will be the distribution of up to 600,000 Scriptures, 100,000 of which are special edition Russian-language New Testaments, featuring an introduction to Christianity, a QR code connecting to a New Life app that was developed by ShareWord Global, and 70 pages of discipleship materials. Funds are still needed to meet a matching grant and publish all 100,000 copies of the New Testament.

The initiative is being organized by U.S.-based ministry Mission Eurasia (www.missioneurasia.org), which has trained many of the young Russian leaders participating in the outreach, in association with partner churches there.

Overseeing the effort is Pavel Tokarchuk, Mission Eurasia’s director in Russia, who grew up in western Siberia and began serving with Mission Eurasia 20 years ago. A product of the ministry’s progressive model of raising up leaders from young nationals, he understands the native people and culture.

“Even though the country has its problems and may suffer from a low international standing, people still have a great deal of national pride. Staging the global competition offers a glimpse of a better future for our country,” he said. “There’s no better time to be able to share the source of real hope with them-a relationship with Jesus.”

The creative outreach has been welcomed by many churches, said Tokarchuk. “We’ve heard from hundreds of churches who want to use this moment for the kingdom. They are ready to use different ways to serve people and to bring the good news to them.”

Mission Eurasia leaders believe that the latest crackdown on religious activity could be a catalyst for the church to grow, as it was in the past. “The church in Russia survived Communist persecution when they were driven underground,” said Mission Eurasia President Sergey Rakhuba. “And that’s what we see in other parts of the world as well.”

Churches participating in the World Cup outreach will be transformed into community centers for the games, broadcasting them live on big screens and providing refreshments. Volunteers will be on hand to talk with millions of expected visitors and offer copies of the free New Testaments.

Interest is high in the World Cup, with most tickets for the games already sold-heightening the appeal of getting to see the action on a church’s big screen. The tournament opened on June 14 when Russia faced Saudi Arabia at Moscow’s Luzhniki Stadium-where the final will be played on July 15. Thirty-two teams will compete in the World Cup, for which the U.S. and Italy, previously strong contenders, failed to qualify.