(WND) Are you one of 20 million uninsured Americans who hasn’t signed up for Obamacare? Then you might be getting a note from the IRS this year “suggesting” you enroll.

“Getting a letter from the IRS can be a threatening and nerve-racking experience; it seldom is seen as a suggestion and more of a threat,” Galen Institute President Grace-Marie Turner wrote in a Forbes column recently.

The IRS is reportedly “reaching out” to Americans who claimed an exemption or chose to pay the tax penalty for not purchasing mandatory health insurance. The ploy is intended to “attract” Obamacare enrollees. “The government is particularly interested in compliance from healthy young people,” Turner wrote. 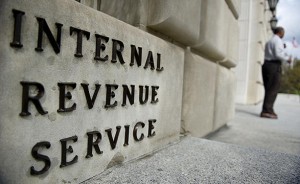 House Majority Leader Kevin McCarthy, Majority Whip Steve Scalise and Ways & Means Chairman Kevin Brady wrote a letter Wednesday to IRS Commissioner John Koskinen. It stated, “We strongly object to any action by the Administration to improperly use sensitive taxpayer information to identify and harass individuals who have rejected the Patient Protection and Affordable Care Act (ACA) by choosing to pay a tax rather than be forced into a health care plan they don’t need and don’t want.”

The lawmakers cautioned the IRS about its use of “protected taxpayer information,” and they asked Koskinen for more information concerning how the IRS intends to “reach out directly to individuals” and how the Department of Health and Human Services plans to push for “compliance with the individual mandate.”

The congressmen cited an HHS fact sheet, which states: “[F]or the first time this fall, we will conduct outreach to individuals and families who paid the fee for being uninsured, or claimed an exemption from that fee, for 2015.”

“The ACA has caused great disruption in the individual health insurance market,” they said in the letter. “We do not believe it to be an appropriate tax administration activity, or a good use of scarce taxpayer resources, to use protected return data to direct taxpayers on their personal coverage decisions.”

Turner expressed concern about IRS involvement in the plan, particularly after the agency targeted at least 400 conservative groups for extra scrutiny. “Anyone who has received any letter from the IRS knows what a knee-knocking experience it is,” Turner wrote.

Approximately 45 percent of uninsured Americans who claimed the exemption or paid the penalty were younger than 35. “Health insurers have made it very clear to the White House that they need more healthy young people to enroll in the exchanges to stabilize the pools, which are too old and sick. People who paid the penalty are a ripe target,” Turner said.

According to tax policy expert Chris Condeluci, 8 million Americans paid the tax penalty in 2014, and 12 million claimed an exemption – meaning 20.3 million people may be contacted this year. “Will getting a dreaded letter from the IRS work with millennials?” Turner asked. “Or will it further anger them about the reach of ‘big brother’ into their lives and decisions?

“One final thing: Chief Justice [John] Roberts, are you listening? Perhaps you can now see why so many of us were worried about the individual mandate and the power that it would give government to exert its will over what should be our personal choices and decisions.”