Is ‘San Andreas’ A Cryptic Warning About What Is Going To Happen In America’s Future?

Hollywood has a long history of inserting political messages, social commentaries, subliminal effects and even cryptic warnings about the future into big budget films.  So is someone attempting to use “San Andreas” to tell us something?  For many years, doomsayers have been warning that the “Big One” is going to come along and rip the coastline of California to shreds.  Up until this moment, it hasn’t happened, but without a doubt we have moved into a time of increased geological activity all over the globe. 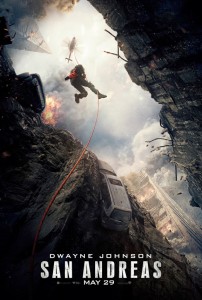 As you read this article, 42 volcanoes around the planet are currently erupting.  That means that the number of volcanoes erupting right now is greater than the 20th century’s average for an entire year.  In addition, we have been witnessing a great deal of very unusual earthquake activity lately.  Just in the United States, we have seen unusual earthquakes hit Michigan, Texas, Mississippi, California, Idaho And Washington within the last month or so.  Could it be possible that our planet has entered a period of heightened seismic activity?  And could it also be possible that someone behind “San Andreas” is aware of this and is trying to warn us about what is coming in our future?

Of course just about everyone in the scientific community acknowledges that the “Big One” is eventually coming to California.  In fact, the U.S. Geological Survey recently came out and said that the probability of a megaquake along the west coast is greater than they had previously been projecting…

A recent report by the U.S. Geological Survey shows the inevitability of just such a quake, which is predicted to hit within the next couple of decades.

“The new likelihoods are due to the inclusion of possible multi-fault ruptures, where earthquakes are no longer confined to separate, individual faults, but can occasionally rupture multiple faults simultaneously,” lead author of the study and USGS scientist, Ned Field says. “This is a significant advancement in terms of representing a broader range of earthquakes throughout California’s complex fault system.”

And it is undeniable that California has been hit by an unusual number of earthquakes recently.  Could this be a sign that our portion of the “Ring of Fire” is heating up?  Just over the past few days, there have been significant earthquakes at dormant volcanoes all over the state of California and in Nevada.  I don’t know about you, but to me all of this shaking is reason for concern.

If the state of California does get hit by a major earthquake in the near future, the damage that would be caused would be immense.  Among those trying to raise awareness about this is Los Angeles mayor Eric Garcetti…

“I hope this movie can be a gut check and a visceral reminder to people of the danger from quakes,” Garcetti said before the screening. “But then that people will also do a head check about how they can really be prepared…to react by looking at some good research and using their heads about the dangers we really face.”

Garcetti has recently introduced a series of proposals called “Resilience by Design” to try to make sure the city’s buildings, telecommunications system and water supply are able to withstand a large earthquake. Emphasizing the challenges Los Angeles faces, the mayor noted how mobile phone service largely went down after the 1994 Northridge quake. And he said the water supply could also be challenged in the next big shaker, considering that the San Andreas Fault (depicted as causing the giant temblor in the Warner Bros.’ film) crosses the California Aqueduct in 20 places.

But not everyone appreciates this new film.  One of the features of “San Andreas” that has been heavily criticized as being “unrealistic” is the giant tsunami that engulfs San Francisco.  According to the Daily Mail, it is not possible for the San Andreas fault to even cause a tsunami…

And, unlike the film, the San Andreas can’t spawn tsunamis.

Most tsunamis are triggered by underwater quakes, but they can also be caused by landslides, volcanoes and even meteor impacts.

So why is a giant tsunami in the film?

Is it just there to make a summer disaster movie a little bit more spectacular, or is there something more to it?

In the United States today, 39 percent of all Americans live in counties that directly border a shoreline, and there have been many that have been warning about the immense devastation that will happen when a giant tsunami hits either the east coast or the west coast.

Could it be possible that the tsunami was in the film because someone believes that a giant tsunami is in our future?

Very few filmmakers make movies purely for entertainment.  Most of them want to “say something” through their films.

So what is “San Andreas” saying to us?

Whatever your opinion on that is, what is undeniable is that the Ring of Fire has been extremely active lately.  In fact, just this week Costa Rica was hit by a cluster of 23 earthquakes near a volcano not too far from the capital…

In a span of eight hours on Monday night and into early Tuesday, experts from the University of Costa Rica and the National University registered at least 23 temblors with epicenters located north of the province of Cartago, some 22 kilometers northeast of the Costa Rican capital.

Ronny Quintero, a seismologist at UNA’s Volcanological and Seismological Observatory of Costa Rica (OVSICORI) reported that the temblors originated on local faults west of Irazú Volcano’s main crater. Experts said they are not directly related to the volcano’s activity.

And all over the planet, volcanoes that have long been dormant are suddenly springing to life.

For instance, a volcano in the Galapagos Islands has spectacularly erupted after being dormant for 33 years…

After almost 33 years of inactivity, Wolf Volcano, the highest in the Galapagos Islands and home to the only population of pink iguanas in the world, began to erupt early Monday, the Galapagos National Park reported. “The volcano is not located near a populated area,” the Park said. “There is no risk for the human population.” The Galapagos Islands are located in the Pacific Ocean, some 1,000 kilometers off the coast of Ecuador. Pink iguanas share the habitat with yellow iguanas and giant tortoises, located on the northwest flank. The lava flow has southeasterly direction, so the park expects the animals won’t be affected.

Our planet is becoming increasingly unstable.  I am fully convinced that we are going to see enormous natural disasters both inside the United States and all over the globe during the next few years.  In fact, I am of the opinion that we will actually witness natural disasters that are so destructive that they will literally change the geography of nations.

So what do you think?  Please feel free to share your thoughts by posting a comment below…