(WNS)–The Ethiopian government declared three days of mourning after officials confirmed Islamic State militants executed at least 35 Ethiopian Christians held captive in Libya. As with other mass killings, the terrorists on April 19 released a video of the murders.

The grisly video bore the grim trademark of Islamic State (ISIS) footage in February that showed the beheadings of 21 Egyptian Christians on a Libyan beach. The Egyptian government ordered airstrikes against Islamic State targets in response. 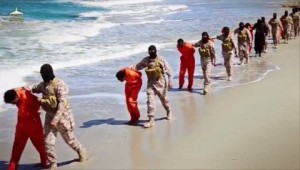 The new 29-minute video showed black-clad ISIS militants executing two groups of Ethiopian men identified as Christians in separate locations in Libya. The terrorists shot dead the first group of captives. In a separate scene, they beheaded the second group on a beach in eastern Libya.

Addressing “the nation of the cross,” the film’s narrator declared: “We swear to Allah, the one who disgraced you by our hands, you will not have safety, even in your dreams, until you embrace Islam.”

Ethiopian officials said they would meet Tuesday to discuss a possible response to the executions, but it’s unclear whether the autocratic government could or would mount a significant retaliation against ISIS.

Meanwhile, the attack showed the Islamic State’s ability to continue to strike targets outside Syria and Iraq, and it came a day after Afghanistan’s president said the group was responsible for a suicide bombing at a Kabul bank that killed at least 33 people.

The murders also underscored the dangerous passage for Ethiopians and others desperate to flee impoverished and embattled nations for the possibility of jobs and security in Europe. Authorities feared as many as 700 African and Middle Eastern migrants died after a ship leaving Libya capsized in the Mediterranean on Sunday.

For migrants still living in Libya, a deeper fear now lurks, especially for Christians seeking to provide for families depending on them back home. On Monday, Bishop Angaelos of the Coptic Orthodox Church in the United Kingdom mourned the loss of “innocent Christians murdered purely for refusing to renounce their faith.” He also called on Christians to pray for the assailants: “We pray for these men and women, self-confessed religious people, that they may be reminded of the sacred and precious nature of every life created by God.”

But for now, ISIS militants have made clear their intention to continue a rampage against all faiths outside of their extremist vision.

“Our battle is a battle between faith and blasphemy, between truth and falsehood,” the video’s narrator said. “Until there is no more polytheism—and obedience becomes Allah’s on its entirety.”