(WNS)–Islamic State militants killed a leading Syrian antiquities scholar on Aug. 18, beheading him in front of dozens of onlookers and hanging his body from a pole in the historic Syrian town of Palmyra, 120 miles northeast of Damascus.

Khaled al-Asaad, who was 81, spent four decades in charge of the archaeological site in Palmyra, the “city of palm trees,” where he was recognized as an expert on the local Roman-era ruins.

The elderly scholar’s death is the latest outrageous act committed by the so-called Islamic State (ISIS), the Sunni militant group that has overrun a third of Syria and Iraq and enforces an extreme and violent version of Islam. The militants consider ancient statues to be idols, and have used explosives to destroy historic shrines in the regions they have conquered. 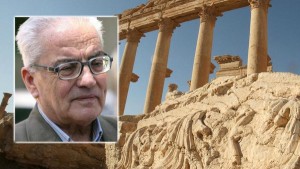 The Islamic State invaded Palmyra in May, stoking fears the extremists would demolish the Roman-era ruins at the edge of the city. The 2,000-year-old oasis town in the middle of the desert is a UNESCO world heritage site.

The militants reportedly demanded Al-Asaad reveal the locations of artifacts archaeologists hid before ISIS fighters arrived. The Islamist group is said to be looting and selling artifacts in order to fund its military operations.

The militants first detained al-Asaad about three weeks ago and brought him in a van to a town square on Tuesday, according to Khaled al-Homsi, who identified himself as a nephew of al-Asaad and said he witnessed the event.

Al-Homsi told the Associated Press one of the Islamic State militants read five charges against his uncle, including that he was the “director of idols” and had represented Syria “at infidel conferences.”

Then another militant pulled out a knife. Al-Homsi, with a shaking voice, said he left the square at that point, unable to watch. The scholar’s body was later hung from a pole in town, and an unverified photo was posted online.

The nephew fled the town later that day. He said the Palmyra archaeological site was al-Assad’s “life,” and that the scholar lived where he could see the Roman ruins from his house, even after growing too old to visit in person.

Al-Asaad retired in 2003 but remained an expert with the national Antiquities and Museums Department.

“He was a fixture, you can’t write about Palmyra’s history or anything to do with Palmyrian work without mentioning Khaled Asaad,” Amr al-Azm, a former Syrian antiquities official, told The Guardian. “It’s like you can’t talk about Egyptology without talking about Howard Carter.”  Al-Azm said the murdered scholar “knew every nook and cranny. That kind of knowledge is irreplaceable, you can’t just buy a book and read it and then have that.”

Maamoun Abdulkarim, the head of the Antiquities and Museums Department in Damascus, called al-Asaad “one of the most important pioneers in Syrian archaeology in the 20th century.”

The Syrian state news agency SANA said al-Asaad had authored or co-authored archeology books and scientific texts, including studies of Palmyra sculptures and of Zenobia, a third-century queen of Palmyra. A powerful ruler, Zenobia conquered Egypt but was ultimately overthrown by the Roman emperor Aurelian.

“Why did they kill him?” asked Al-Asaad’s son-in-law Khalil Hariri.

Throughout their effort to expand a self-declared caliphate, ISIS adherents have repeatedly destroyed historic sites they consider sacrilegious.

They have bulldozed or damaged archaeological sites and statues in the ancient cities of Nimrud, Nineveh, and Hatra. Last summer they used explosives to blow up a mosque dedicated to the biblical prophet Jonah. And in Mosul, they toppled ancient statues housed in a museum and smashed them to bits with sledgehammers.

The militants have not yet destroyed Palmyra’s Roman-era ruins, complete with colonnaded streets and a pagan temple, but in June they demolished a 2,000-year-old lion statue known as the Lion of al-Lat. The limestone statue, discovered in the 1970s at the site of an ancient pagan temple, was 10 feet tall and weighed 17 tons. The militants also destroyed two shrines in the city.

Last month, the Islamic State released a video showing the execution-style killings of about 25 captured government soldiers in Palmyra’s amphitheater. Hundreds of onlookers watched as militants shot the men with pistols.

“Their systematic campaign seeks to take us back into pre-history,” said Hariri. “But they will not succeed.”