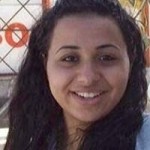 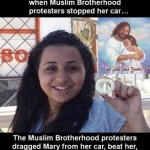 (WNS)–An Islamist mob beat, stabbed, and shot Mary Sameh George to death in Cairo on March 28, reportedly because of the cross hanging in her car. George, a Coptic Christian in her mid-20s, parked near Virgin Mary and Archangel Michael Coptic Orthodox Church to deliver medicine and food to the elderly after work that day.

After clashing with security officers, Wahid said the protesters headed toward the church firing shots, and attacked George when they identified her as a Christian by a cross hanging from her rear view mirror. He described the mob jumping on the car until the roof collapsed, dragging her from the car, beating and stabbing her repeatedly.

“They were chanting ‘Allahu Akbar, Allahu Akbar’ and cursing her while stabbing her,” Wahid said. “Then one of them shot her in the back and that led to her death. After killing her they set her car on fire.”

The Australian Coptic Movement Association condemned the targeted killing as a “callous, vicious, and unprovoked act.” They called on the Egyptian government to investigate her murder and “send a clear message that this behavior will not be tolerated.” Coptic Christians make up about 10 percent of the Egyptian population.

In his column about George’s killing, Raymond Ibrahim, a Middle East expert and the son of Coptic Egyptians, quoted an eyewitness who said, “Let me tell you, here in Ain Shams, we [Christians] know that every Friday is a day of death; that the day after Friday, Saturday, we’ll be carried to the morgue!”

An Interior Ministry spokesman, Hani Abdel-Latif, also blamed the Muslim Brotherhood for George’s death as well as three other killings that day, including female journalist Mayada Ashraf. But no one has been charged in George’s murder, while four people have been arrested in connection with Ashraf’s death, according to ICC’s Todd Daniels.

Hal Meawad of Coptic Solidarity told ICC there have many incidents like this one ever since the Egyptian revolution in 2011 that led to “a breakdown in the security situation on the streets. Christians are paying a very high price for this breakdown,” he said.