The Focus on the Family founder released his endorsement on Thursday (July 21), hours before Trump took the stage to accept his party’s nomination on the last night of the 2016 Republican National Convention in Cleveland.

And, while he said he made the endorsement only on behalf of himself and not on behalf of Focus on the Family or his Family Talk organization and radio program, he noted, “Most evangelicals I know have decided for various reasons that they will really have only have one choice for president, and that is Donald J. Trump. 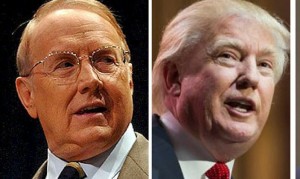 “I believe it’s a good choice. America needs strong and competent leadership,” he said.Dobson, a member of Trump’s evangelical advisory board, had attended the meeting last month in New York City between Trump and nearly 1,000 evangelical Christians. Dobson made headlines when he announced the candidate recently did “accept a relationship with Christ” and was now a “baby Christian,” something Trump still has not acknowledged.

The decision to endorse Trump came in direct response to Sen. Ted Cruz’s speech the night before at the convention, a Dobson spokesperson confirmed to RNS. The Texas senator was booed when it became clear he would not formally endorse the candidate.

Dobson also said the presidential nominee has been “unwavering in his commitment to issues that are important to evangelicals such as myself.” He pointed to Trump’s promises to “appoint conservative Supreme Court justices, preserve religious liberty, rebuild the military and defend the sanctity of human life.”

Trump’s positions on abortion have varied, with him saying he was “very pro-choice” as late as 1999. Dobson said he chose to evaluate Trump based not on his past but “on what he says are his current convictions.”

“I believe God can change the hearts and minds of people and I celebrate when they support principles of righteousness,” the evangelical said.

Family Research Council President Tony Perkins also said for the first time Thursday night at the convention he would be voting for Trump.

Other evangelical leaders who are supporting Trump include pastors Mark Burns and Paula White, who both delivered prayers at the Republican National Convention; Liberty University President Jerry Falwell Jr., who spoke on the last night; pastor Robert Jeffress of Dallas; and Ralph Reed of the Faith & Freedom Coalition.

Burns, White, Falwell, Jeffress and Reed all are members of Trump’s evangelical advisory board.