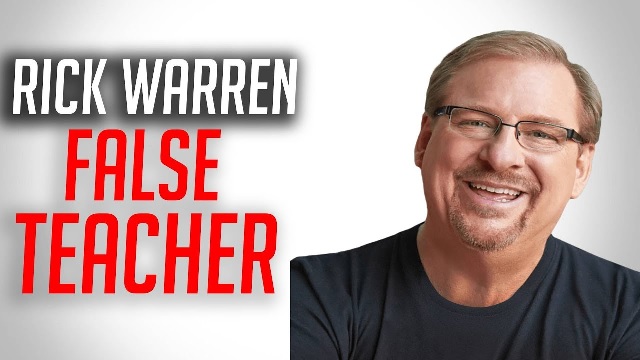 Rick Warren, an emergent church heretic and false teacher who recently ordained three women pastors in his Southern Baptist Saddleback Church, who also invited Ann Voskamp—a woman who says she flew to Paris to learn how to make love to God—to preach at his church, and who runs around with the Pope praising him and speaking at conferences with him, recently announced his retirement.

In a post on social media, he wrote: “After almost 43 yrs of pastoring Saddleback Church, Kay & I are announcing that God is calling us to step aside for the next generation! We feel deep love & humble gratitude for our church family. What a faith adventure it’s been! Now we’re called to 2 new ministries. More later”

And former Southern Baptist Convention president, JD Greear, praised him. It comes as no surprise as Greear is well-known for his affinity toward false teachers. JD Greear promoted Word of Faith heretic, Christine Caine not on one occasion, but twice. He also partnered with a woman who said God raised up homosexuals to lead the Church as part of his “gospel team.” And Greear hired a pastor who praised the LGBTQ community for “leading the civil rights movement.”

But he lambasts Christians who actually believe the Scriptures and want the Bride of Christ to abide by them without compromise.