Jeb and Hillary: The Worst of Evils

Does anyone in the country want to see another Bush vs. Clinton presidential race? If they do, they have a death wish for America.

It is not uncommon these days to hear people refer to Jeb and Hillary as the “royals.” And, while I’m glad that a lot of people seem to have a natural revulsion to having another Bush or Clinton in the White House, the fact is, the Bushes and Clintons are not two “royals.” They are one CRIME FAMILY. 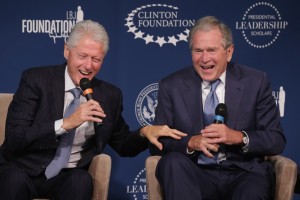 WASHINGTON, DC – SEPTEMBER 08: Former U.S. presidents Bill Clinton (L) and George W. Bush share a laugh during an event launching the Presidential Leadership Scholars program at the Newseum September 8, 2014 in Washington, DC. With the cooperation of the Clinton, Bush, Lyndon B. Johnson and George H. W. Bush presidential libraries and foundations, the new scholarship program will provide ‘motivated leaders across all sectors an opportunity to study presidential leadership and decision making and learn from key administration officials, practitioners and leading academics.’ (Photo by Chip Somodevilla/Getty Images)

One of the greatest hoaxes of modern times was the façade that the Bush and Clinton families were political adversaries, when the truth is, they have all been “best buds” for most (if not all) of their political careers. For anyone who wants to research the veracity of what I am saying (with an honest and open mind), it will take almost no time to be convinced. The recent reports about foreign influence and money that have poured into the Clinton coffers are nothing new and are just the tip of the iceberg.

While there is no way that we can know the totality of all that this international Crime Family is guilty of, there is enough evidence and eyewitness testimony out there to convince even the most stubborn skeptic that these people are among the most despicable trolls in the world. If we had a semblance of a free and independent national news media, the Bushes and Clintons would have already been exposed as the miscreants they are and would be serving life sentences in prison–which is where they all belong. (Of course, that could be said for a bunch of those criminals in Washington, D.C.)

We hear much talk about the “lesser of two evils.” Well, folks, I’m here to tell you that Jeb Bush and Hillary Clinton are the worst of evils. Both of these people are owned lock, stock, and barrel by the international elite who are hell-bent on destroying capitalism, free enterprise, constitutional government, and yes, the sovereignty and independence of the United States. There is no substantial difference between them. They may have two different last names, and claim to represent two different political parties and ideologies, but, again, they are members of the same cabal of international gangsters. And between the two, Jeb is probably more dangerous.

Despite the best attempts by the propaganda press to keep Hillary’s crimes under wraps, the skeletons are starting to fall out of the closet. It will be virtually impossible to keep them from developing into full-fledged scandals in forthcoming months. Hillary is damaged goods. In fact, Hillary is NOT even electable. I repeat: Hillary is NOT electable. The only way that Hillary will even obtain the Democratic nomination is if the power elite want to offer her up as a political sacrifice so Jeb (or another controlled Republican) can be the next President. The fact that New York newspapers are already breaking the foreign-cash scandal against Hillary is illustrative of what I’m saying. But if it looks like they cannot cram Jeb Bush down the throat of the Republican Party, and there is too much popular resistance to Bush, they might decide to let so many skeletons out of the closet that Hillary would not be able to even win the nomination.

As for Jeb Bush, he is the quintessential neocon: he loves Big Business, the U.S. Chamber of Commerce, and, especially, Big Banks and the Federal Reserve. He loves perpetual war; he loves the military-industrial complex; he loves open borders; he loves the DHS, the Patriot Act, and a domestic Police State. And Jeb Bush knows where the bodies are buried. He knows virtually every skeleton in every closet in Washington, D.C.–and in foreign capitals.

Jeb and his fellow globalist robot, Benjamin Netanyahu, are international gangsters of the highest (or lowest, depending on how one looks at it) order. With the two of them in power at the same time, WATCH OUT! The Warfare State and Police State would grow exponentially. War in the Middle East would become as hot as hot can be. Jeb and Bibi would take the world to the precipice of, or into, World War III.

Skull & Bones, the Rothschilds, Bohemian Grove, CFR, Trilateral Commission, Bilderbergs: Jeb is in the shadow of all of it. Jeb Bush is the Darth Vader of 2016. And with virtually unlimited money and a questionable voting system–not to mention the support of virtually the entire international banking system, military-industrial system, and corrupt foreign leaders in his pocket–he is going to be a most formidable candidate. The media is already skewing poll numbers to make it appear that Jeb Bush is popular with grassroots Republicans. Media manipulation of opinion in favor of Bush has only begun. It will proliferate tremendously in the months to come.

If Jeb Bush is elected President of the United States, he will make Barack Obama’s terms in office look downright benign by comparison.

Of course, the second scenario is that the power elite might use Bush as a smokescreen to pave the way for someone equally controlled. The field of GOP contenders is littered with neocons: Chris Christie, Marco Rubio, Scott Walker, Mike Huckabee, Lindsey Graham, Ben Carson, Carly Fiorina, John Kasich, Bobby Jindal, Bob Sasse, etc. (Forget about Mike Pence; he killed any presidential aspirations he may have had with his embarrassing flip flop over the religious freedom issue in his home State of Indiana.) If conservatives derail Jeb Bush in the primaries–and if the media keeps Hillary Clinton in the race–you can know that this second scenario is the one the elites are using. 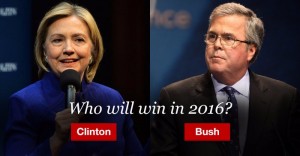 Thus far, the only two Republican candidates who are outside the blessing of the global elite are Ted Cruz and Rand Paul. So, you can mark this down and take it to the bank: the Republican establishment and propaganda media will do everything in their power (which is substantial) to make sure that neither of these men obtain the nomination.

But Jeb Bush and Hillary Clinton represent the very pinnacle of the ideal globalist-controlled candidate. If you value your liberties at all, you better pray to God that neither of these people is elected President next year. As I said, anyone who would want to see a Jeb Bush vs. Hillary Clinton presidential race in 2016 has a death wish for America.