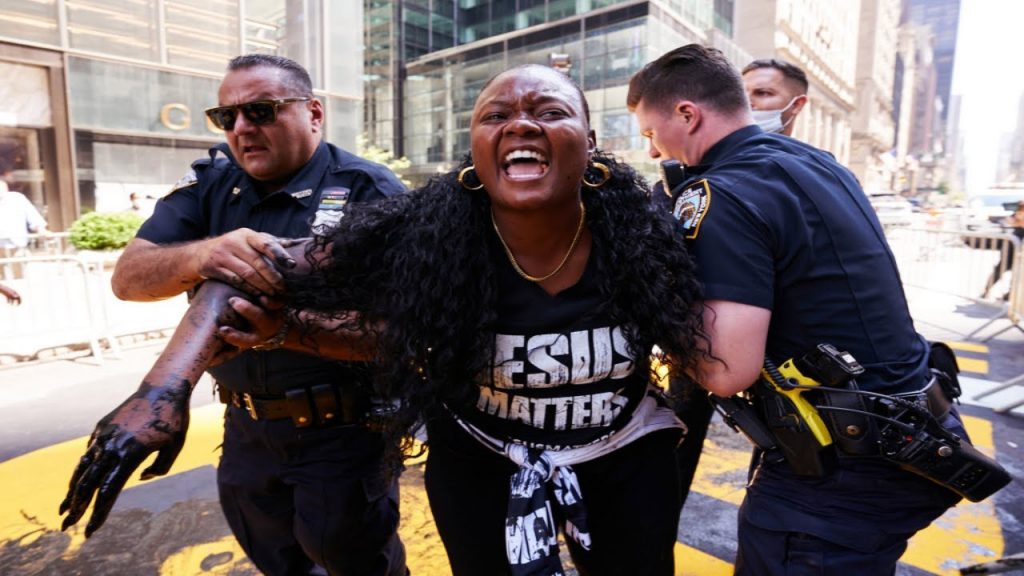 Videos of a small group of Christians defacing Black Lives Matters murals across New York City recently have gone viral. At least two women have been arrested for their actions.

Christian activists, who say they want the political left to “stop with the nonsense,” used #JesusMatters to live stream their acts of protest. One video posted online by one of the organizers has amassed over 1.5 million views in just 3 days. The video shows two black women smearing black paint over a yellow “Black Lives Matter” mural painted on a city street outside of Trump Tower in Manhattan.  The women called for the city to “refund the police” and urged people to “take their country back.”

The “Jesus Matters” group is led by evangelists Bevelyn Beatty, 29, and Edmee Chavannes, 39. They are the founders of At The Well Ministries. The ministry explains on its website that it seeks to share Jesus “one city at a time.”

The group considers the Black Lives Matter movement to be “a domestic terrorist organization” that doesn’t “care about black lives” since it supports abortion and wants to defund the police.

The video began streaming just before 3 p.m. It starts by showing the women going through many cans of paint in the back of a sports utility vehicle.  “We’re not standing with Black Lives Matter. We want our police. Refund our police,” Beatty said in the video.

The women shouted the name of “Jesus” and yelled that “Jesus is King.”

“We are here to exhort our country to start taking it back, to stop with the nonsense, that all lives matter, blue lives matter,” said a member of the group who was filming the acts of protest outside Trump Tower. “We don’t agree with ‘defund the police.’ We are here to be a voice because the left has the loudest voice right now and we have had enough.”

The New York Post notes that Beatty urged onlookers to “stand with your police force, vote for Trump, vote Republican, vote for Christians, and stand up Christians.”

“Vote the ungodly, demonic, anti-Christ people out of this nation,” Beatty was quoted as saying. In the video, Beatty was seen being verbally criticized by an older black gentleman and other onlookers as she was being handcuffed. She vulgarly responded to them.

Beatty and Chavannes, of Staten Island, were both taken into custody by police. According to The Staten Island Advance, they were both charged with criminal mischief but were released hours later.

As police tried to detain Beatty, one of the officers appeared to have slipped in the wet paint and fell to the pavement. As reported by CBS New York, the officer was taken away in an ambulance. A statement released on the At The Well Ministries Facebook page explains that the officer is “doing OKAY!”

“He had a hard fall but is doing very well and fine,” the At Well Ministry post reads. 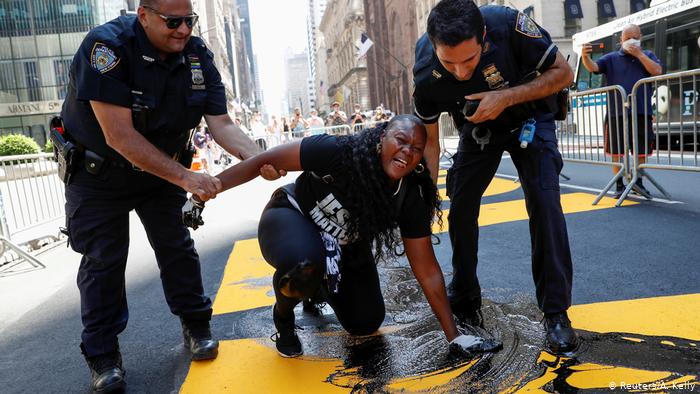 Shortly after their release, Beatty and colleagues targeted “Black Lives Matter” murals in Harlem late Saturday night. The group streamed live again on Facebook as they poured paint over the murals at 7th Avenue and West 125th Street as they drove by.

A little while later in the early hours of Sunday morning, a third video was streamed showing Beatty and another woman spreading black paint over a mural located on Fulton Street in Brooklyn.

In an update video on Sunday, Beatty said the police treated her very well while in custody. “You’ve got to read between the lines and use your noodle. The police were in 100% agreement with us,” she said. “We were the voice that they couldn’t have. We were the stand that they couldn’t take at that moment. The Lord just blessed what happened yesterday.

Beatty went on to say that the police treated them “like princesses, with love and kindness.”

“They treated us so good,” she said. There were a few other people with Beatty and Chavannes who handed them paint and filmed the occurrences as seen in the live videos. The police officers were kind to them as well, she said.

The videos have garnered the support of many conservatives who praised Beatty for her “bravery.” On July 16 Beatty said she’d was fed up with Black Lives Matter.  “I’m at a point honestly, spiritually, where I have had absolutely enough,” Beatty said. “It hit home today. It’s the mindset because Black Lives Matter is a green light to the Black community to not do better.”

It’s not the first time the evangelist has gotten attention for her actions. She regularly speaks out against abortion. Her videos outside of Planned Parenthood clinics have also gone viral and have been shared by popular political activists, such as Candance Owens.

According to The Daily News, Beatty and Chavannes were arrested in June for protesting outside Planned Parenthood’s New York headquarters. The news outlet also reports that they were charged with disorderly conduct in Fort Myers, Florida for interrupting a council meeting.

A clip of Beatty will also appear in an upcoming movie called “Trump Card” produced by conservative filmmaker Dinesh D’Souza.