NASHVILLE (BP) — Even evangelical Christians can believe in a mythical Jesus, and that needs to be corrected, says Daniel Darling.

“I’ve seen a tendency among evangelicals, including myself, to create a Jesus in our own image rather than surrendering to the Spirit’s work of creating us in Christ’s image,” Darling told Baptist Press in an email interview. “The Scriptures present one Christ, the Christ of history, the Christ who is. I think chasing down a Jesus who looks just like us ends up with disappointment and disillusionment. The Jesus who is is infinitely better than the Jesus we create.”

Darling’s new book, “The Original Jesus: Trading the Myths We Create for the Savior Who Is,” is his effort to clear up some popular and misguided notions about Jesus. 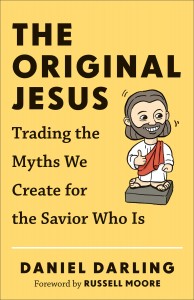 “I want to peel away the faux Jesus we’ve constructed and expose the real Jesus,” writes Darling, vice president for communications of the Southern Baptist Ethics & Religious Liberty Commission, in the introduction. “My only goal is to help knock down some Jesus myths, our ideas about Jesus that are either incomplete or totally false.”

In a review for The Gospel Coalition, Justin Dillehay concludes Darling succeeded in his mission, saying he “peels back the husk of cultural myths and gives us the historical, biblical kernel — a Jesus who is both God and man, transcendently above and immanently (Immanuel-ly) with us, and a Jesus who is different than we would have chosen, but better than we could ever have imagined.”

Darling addresses 10 myths in the same number of chapters in the book, which will be released Tuesday (Sept. 1). The chapter titles — and myths — include “Red-letter Jesus,” “Braveheart Jesus,” “American Jesus,” “Dr. Phil Jesus,” “Prosperity Jesus” and “BFF Jesus.”

Two of these, Darling said, are particularly prevalent and worrisome in American culture: “Red-letter Jesus” and “BFF Jesus.”

“I understand the sentiment of wanting to follow Jesus in the way of compassion and relief and peace,” he told BP regarding the “red-letter” emphasis practiced by some Christians. “But we do damage to the revelation of Scripture and of the presentation of Christ from Genesis to Revelation if we accept a hermeneutic that says only the words quoted by Jesus in the gospels are Scripture that matters.”

The BFF version of Jesus produces a casualness about the Son of God that can imperil people, Darling said.

“I think chasing down a Jesus who looks just like us ends up with disappointment and disillusionment.” – Daniel Darling

In the book, he writes, “Our homogenized evangelicalism can at times make weekly worship more like a divinely inspired TED talk than an act of worship, offering a Jesus who desperately wants to be your BFF but is totally chill if you’re, like, not that into him.”

Darling told BP, “When we reduce Christ down to a jogging buddy or a sidekick, we lose the powerful deity who has come to save us, rescue us and bring us home. We need to recover a sense of the transcendence and holiness of God.”

Holding onto a mythical Jesus who is a mascot for a favorite cause may mean the American church will be “in for a rude awakening over the next several decades,” he writes in the chapter on “American Jesus.”

“I don’t want to sound alarmist,” Darling says in the book, “but the coming years will force us to make difficult choices. The unbroken social contract between the church and the culture, rare in human history, is fraying, and I’m afraid we’re not ready for what comes next. We will have to choose between cultural acceptance and the way of Jesus.”

He told BP, “If we’ve followed a Jesus who is so well-liked by the world that there is no difference between the Christian and the culture, then we’ve followed the wrong Jesus.”

The most significant action Christians can take to avoid following a mythical version of Jesus is “to surrender our assumptions about Jesus to the revelation of Scripture,” Darling told BP. “Let Scripture, not our emotions, not our feelings, not our preferences, form our view of Christ.”

The solution involves a corporate aspect as well, he said. “[I]t’s important to be deeply involved in a local, Bible-believing church and embedded in community. One thing we’ve lost in America that we need to recover is the sense of growing in Christ in community.”

Pastors, meanwhile, have the responsibility “to get out of the way and let the Word of Christ dwell in people with richness and power,” Darling writes in his book, commending expository preaching. “This stewardship is why we must lay aside our opinions and proclaim God’s Word.”

The Original Jesus, published by Baker Books, will be available at Lifeway Christian Stores, among other booksellers, and Amazon.