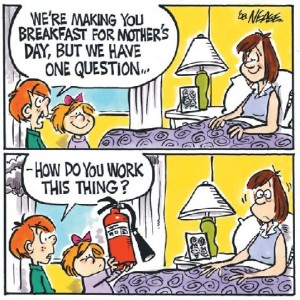 So Much Work to Do

A farmer and his recently hired hand were eating an early breakfast of biscuits and gravy, scrambled eggs, bacon and coffee that the farmer’s wife had prepared for them. Thinking of all the work they had to get done that day, the farmer told the hired man he might as well go ahead and eat his lunch too. The hired man didn’t say a word, but filled his plate a second time and proceeded to eat. After a while the farmer said, “We’ve got so much work to do today, you might as well eat your supper now too.” Again, the hired man didn’t respond but refilled his plate a third time and continued to eat. Finally, after eating his third plate of food, the hired man pushed back his chair and began to take off his shoes. “What are you doing”? the farmer asked. The hired man replied, “I don’t work after supper.”

A couple took a puddle-jumping flight with 4 stops on the way to Dallas. At the first stop, a little white truck drove up to the plane’s wing. Wife: “What’s that truck doing?” Husband: “We’re taking on more fuel.” The refueling process was repeated at the next two stops as well.  At the last stop before Dallas: Husband: “Ya know, in spite of all these delays, we’re making pretty good time.” Wife (pointing out the window): “Maybe — but that li’l white truck is keeping up with us!”

He Had It All

This morning I was sitting on a park bench next to a homeless man. I started a conversation by asking him how he ended up this way. He said, “Up until last week, I still had it all. I had plenty to eat, my clothes were washed and pressed. I had a roof over my head. I had TV and internet, and I went to the gym, the pool, and the library. I was working on my MBA online.  I had no bills and no debt.  I even had full medical coverage.” I felt sorry for him, so I asked, “What happened?  Drugs?  Alcohol?  Divorce?” “Oh no, nothing like that,” he said. “I just got out of prison.”

But my rememberer is broke.

To you that may seem funny, but to me, that is no joke!

For when I’m here I’m wondering

If I really should be there.

And when I try to think it through, I haven’t got a prayer!

Oft times I walk into a room,

Say, What am I here for?

I wrack my brain, but all in vain

A zero is my score.

At times I put something away

Where it is safe, but, gee!

The person it is safest from is generally me!

When shopping I may see someone,

Say Hi, and have a chat.

Then, when the person walks away,

I ask myself, Whos that?

Yes, my forgetters getting better

While my rememberer is broke,

And its driving me plumb crazy,

And that isn’t any joke!

One day while driving with my 4-year old-daughter, I beeped the horn by mistake. She turned and looked at me for an explanation. I said, “I did that by accident.” She replied, “I know that cuz you didn’t say ‘YOU JERK!'”

At a wedding ceremony, the pastor asked if anyone had anything to say concerning the union of the bride and groom, it was their time to stand up and talk, or forever hold their peace. The moment of utter silence was broken by a young beautiful woman carrying a child. She started walking toward the pastor slowly. Everything quickly turned to chaos. The bride slapped the groom. The groom’s mother fainted. The groomsmen started giving each other looks and wondering how best to help save the situation. The pastor asked the woman, “Can you tell us why you came forward? What do you have to say?” The woman replied, “We can’t hear in the back.”

There’s a Fee for That

Two brawny men came to install some new floor covering in the kitchen. Once they had moved the stove and refrigerator out of the way, it was not long before the job was done. As they were getting ready to leave, they were asked to put the heavy appliances back in place. The two men said that would cost an additional $145 service fee, stating it was not in their contract. The homeowner really had no choice but to pay them. As soon as they left, however, the doorbell rang. It was the two men. They asked the homeowner to move a car that was blocking their van. The homeowner told them there would be a fee for that: $145.

The Prodigal Son and Credit

One night I was tucking my 4-year-old daughter into bed and I told her a nightly Bible story. This night it was the story of the prodigal son. We discussed how he had taken his inheritance early, left and spent it all on living it up and partying until he had no money left and had to work on a pig farm where he couldn’t even afford to eat what the pigs ate! He remembered his father and went back home to ask for a job and forgiveness.  His father welcomed him home with much joy!  After we finished the story I asked my daughter what she learned and she immediately said, “Never leave home without your credit card!”

Reaching the end of a job interview, the HR director asked a young Engineer fresh out of MIT, “And what starting salary were you looking for?” The Engineer said, “In the neighborhood of $125,000 a year, depending on the benefits package.” Kathy said, “Well, what would you say to a package of 5 weeks’ vacation, 14 paid holidays, full medical and dental, company matching retirement fund to 50% of salary, and a company car leased every 2 years

– say, a red Corvette?” The Engineer sat up straight and said, “Wow! Are you kidding?” Kathy replied, “Yeah, but you started it.”

My engineer husband is meticulous but mild-mannered. While our new house was being built, he would leave notes for the workmen, politely calling their attention to mistakes or oversights. Two weeks before we were to move in, the floors still were not finished, the bathrooms were not tiled, and necessary fixtures were not installed. I was sure that the work would never be completed in time. However, on moving day, we found that the house was ready to receive us. Curious as to how this miracle had been accomplished, I went and checked where my husband always left his notes for the workmen. Posted prominently on the living room wall was my husband’s last note: “After September 15, all work will be supervised by five children.”

Dewey dragged himself into his doctor’s office one day looking very exhausted. “Doctor,” he said, “there are dogs all over my neighborhood. They bark all day and all night, and I can’t get a wink of sleep!” “I have good news for you, Dewey,” the doctor said, rummaging through a drawer full of sample medications. “Here are some new sleeping pills that were just approved. They work like a dream. Just a few of these and your troubles will be over.”

“Great,” said Dewey, “I’ll try anything. Let’s give it a shot.” The doctor gave him the pills. Dewey thanked him and left. Two weeks later, Dewey came back to the doctor’s office looking worse than ever. “Doc, your plan is no good. I’m more tired than ever!” Dewey exclaimed. “I don’t understand how that could be,” said the doctor, shaking his head. “Those are the strongest pills on the market!” “That may be true,” answered Dewey wearily, “but I’m still up all night chasing those dogs and when I finally catch one, it’s really hard getting him to swallow the pill!”

Thoughts For The Day: