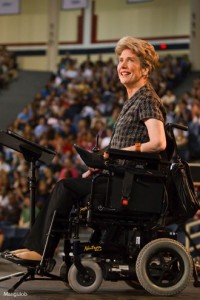 (WNS)–Joni Eareckson Tada was a talented teenager who enjoyed hiking, horseback riding, and swimming. Then, at the age of 17, she dove into Chesapeake Bay after misjudging the depth of the water and broke her cervical vertebrae, becoming a quadriplegic from the shoulders down. After years of rehabilitation, religious doubt, and struggle, she told the story of her life in a 1976 autobiography that became an international best-seller. That book also launched her career as a speaker and activist for the disabled and the voiceless, including the unborn. I had this conversation with Tada at the most recent conference for the National Religious Broadcasters in Nashville.

Joni, you’re probably going to be embarrassed for me to say it this way, but you have become a national treasure. Maybe I’m not seeing the forest for the trees, but I’m so focused on God’s calling on my life, which is to share His love with special needs families and to promote a biblical worldview on disability globally. I forget about all the other things that might be happening and the perceptions people might have. I’m honored, though, that my life might serve as a role model of encouragement to other brothers and sisters in Jesus.

All too often, we in the church, we want to erase suffering out of the Christian’s dictionary. After 47 years of living as a quadriplegic in a wheelchair, perhaps people look at my smile and they can see that it is hard-won. Maybe that gives me credence when I speak from this wheelchair about the sufficiency of God and His word and His grace. If that makes me a national treasure, I’m absolutely honored.

One of the ways that you exhibited grace under fire recently was when the Academy of Motion Picture Arts and Sciences rescinded its Academy Award nomination for the song that you sang for the movie, Alone Yet Not Alone. The Academy decided to rescind the nomination when they felt the songwriter had bent the rules by e-mailing friends, alerting them to be on the lookout for this film. It was so under-the-radar, so they felt that was putting undue influence on voters. You go figure that.

When the news came out, I think people thought it was very specifically a backlash to the fact that it was a Christian film and that it had such a Christian message. There was really no proof that it was based on the Christian message of the film. To be quite honest, many members of the Academy who voted for the film had not even seen it. They had only heard the song on a CD. As I was told later, many people don’t take the time to actually watch the movies that come with the DVDs that the Academy circulates. I don’t know that the Christian message of the film, necessarily, was the reason.

But many people thought that was the case. I think I said on Fox News and a couple of other interviews with Rolling Stone Magazine and Billboard, it would not surprise me if this nomination was rescinded on the basis of the Christian message of the film. It would not surprise me that Hollywood shuns Jesus Christ. But let’s remember He was shunned by weightier adversaries than those in the entertainment industry. I tend to think it was Hollywood insiders and people who were connected with major motion picture companies who were just outraged that this small, little film that nobody had seen should be elevated to the stature of the Oscars.

That film and that song got more attention as a result of the controversy than they would have if the song had just stayed in running for nomination and then maybe gotten defeated for the award itself. Absolutely. In fact, when I was interviewed by CNN, the reporter had never heard of me. But he said, having watched that video, he wanted to find out more about what I do. The Academy who originally voted for the song must have seen that video. Perhaps that prayer moved them.

I was amazed that both Christian and secular media were so quiet on this issue here in the United States. I wrote an op-ed piece in Time magazine in late February. I received so many comments from people who were both believers and non-believers. Who would have thought the culture of death was that insidious that we would allow physician-assisted suicide for children who are despairing of their medical conditions?

I think we need to understand that children take cues from adults. When a mother approaches a child who is sick and says, “Honey, I know you’re in pain, and I know that this condition is very hard. I want you to know that you have an option to go to sleep and never wake up. You’ll never see us again. Do you want that?” What a horrifying question to pose to a child, especially from a parent. The child might think, maybe Mommy wants me to do this. Maybe she’s tired of taking care of me in the hospital.

What concerns me is this continuing culture of death is promoting the premise that one is better off dead than disabled. It doesn’t matter what age you are, whether you are unborn, whether you are an infant, whether you are elderly. And of course as a quadriplegic, living in a wheelchair for 47 years, this is a message that I think is straight from the pit of hell.

We as Christians have to promote a culture of life and help parents of special-needs children ascribe positive meaning to their child’s pain. Help pull that child out of social isolation. Help them deal with anger issues, depression issues, provide the pain management techniques and medications that might be required to comfort them, encourage them, keep them connected to reality. There are all kinds of things we can do to a person despairing of his life because of his medical condition that fall within the purview of a Christian’s responsibility.

How has the church responded to your work and to the plight of the disabled generally? I think that the church still is a little schizophrenic on this issue. We as Christians here in the United States don’t know what to do with suffering. Surveys have shown that many Christians feel physician-assisted suicide as an end of life option is not all that bad of an idea, and that is abhorrent. It shows that we don’t know how to grapple with suffering and find God and embrace Him in the midst of our suffering. We want to erase the word suffering out of the Christian’s dictionary. We’re going to ibuprofen it, drug it, institutionalize it, do everything but live with it. And yet, people with disabilities have to live with it each and every day.

I hope you don’t find this question obnoxious. As I’m here with you face-to-face, you look marvelous. If I didn’t know better I would have said, “She spent all morning in front of a mirror getting herself ready.” How does that work? You hit the nail on the head for me of my fight to stay satisfied in God because every morning it is a challenge to get up. It is so hard living with quadriplegia and pushing 65 years old. When I wake up in the morning, my eyes are still closed, my head is on the pillow, and I can hear my girlfriend in the kitchen running water for coffee. I know she’s going to come into the bedroom in a moment. She’s going to give me a bed bath, do my toileting routines, exercise my legs, strap on my corset, pull up my slacks, put on my blouse, sling me into a wheelchair. Then she will push me to the bathroom, brush my teeth, brush my hair, and blow my nose. I haven’t even opened my eyes yet and I’m already exhausted. I’m thinking, “I have no strength for this. God I am so tired of being a quadriplegic. I’m so tired of this. I have no ability to do this today, but I can do all things through you if you strengthen me. So would you please empower me today? Infuse within me today the grace needed to help me to open my eyes and face the day with a bright attitude, your attitude.” I tell you what, when I pray that way—and it happens almost every morning—by the time my girlfriend does come into the bedroom with that cup of coffee, I’ve got a smile sent straight from heaven.

But I refuse to do that because God’s Word tells me the truth. The truth is every time that girlfriend of mine gets me up in the morning, she is enlarging her eternal estate. She is gaining a greater capacity for service and worship and joy in heaven. She gets to experience that by helping me. Looking at life that way helps me be courageous about my own experience with a disability. God can use me every time I ask for a drink of water. Every time I ask for someone to empty my leg bag, they have a chance to serve sacrificially, and that is helping them.