(WNS)–The owner of Hands on Originals, a Lexington, Ky., print shop, did not violate a local nondiscrimination ordinance when he refused to create T-shirts for an annual gay pride festival, the Kentucky Court of Appeals ruled on May 12.

The 2-1 decision is the second to uphold Blaine Adamson’s right to engage in “viewpoint or message censorship.” A local gay and lesbian advocacy organization asked Adamson to create T-shirts promoting the organization’s 2012 Pride Festival. Adamson declined, saying he could not promote that message as a Christian. 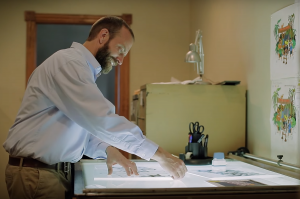 The organization filed a complaint against Hands on Originals with the Fayette County Human Rights Commission, which ruled in 2014 the company violated a county ordinance prohibiting discrimination based on sexual orientation or gender identity.

Adamson appealed, and five months later the Fayette Circuit Court reversed that ruling. But the Human Rights Commission continued to press its case, claiming Adamson’s refusal to serve the gay advocacy organization constituted discrimination against a protected class of citizens.

“Today’s decision is a victory for printers and other creative professionals who serve all people but cannot promote all messages,” said Jim Campbell, an attorney with Alliance Defending Freedom who represents Adamson.

In addition to garnering legal backing from religious liberty advocates and libertarian public policy organizations, Adamson’s case drew support from a seemingly unlikely source—the lesbian owners of a New Jersey T-shirt shop. The couple said printers should not be compelled to create messages that conflict with their consciences.

Attorneys defending Christian business owners in other states make the same argument. Business owners should not be compelled—whether in word or artistic expression—to convey a message at odds with their conscience or religious convictions.

“It is our hope that other courts will uphold the freedom of other creative professionals nationwide who are having to fight for this same freedom,” Campbell said.

But the Kentucky Court of Appeals clearly drew a line between the two forms of expression.

In their decision, the appeals court judges noted the ongoing legal conflicts between private business owners and gay and lesbian citizens requesting their services, specifically for weddings. The Kentucky court said applying public accommodation laws in matters of conduct “is less straightforward.”

The court recognized Hands on Originals as a place of public accommodation but also as a “public forum” in which Adamson participates in “pure speech” that he can, and has, rightfully censored. The court said the words, not the people requesting the speech, constituted the conduct in question.

But the court made clear it would not accept as a defense the refusal to accommodate an activity predominantly associated with a specific group of people. In listing examples of discrimination in public accommodation, the court cited Craig v. Masterpiece Cakeshop, in which a gay couple sued Denver, Colo., bakery owner Jack Phillips for declining to make a cake for their same-sex wedding celebration. Phillips lost his case at every level but has appealed to the U.S. Supreme Court.

“Holding that a cake-maker’s refusal to sell a wedding cake to a homosexual couple, because the cake-maker knew the cake would be used to celebrate a same-sex marriage and the cake-maker was opposed to such unions, is the equivalent of discrimination on the basis of sexual orientation,” the Kentucky court said.

In his dissent, Judge Jeff Taylor argued that is exactly what Adamson did: His refusal to serve the person requesting the order constituted a refusal of the people that person represented. Taylor noted the U.S. Supreme Court upholds that “religious beliefs and conduct may be burdened or limited where the compelling government interest is to eradicate discrimination.”

The dissenting judge argued the 2015 Obergefell v. Hodges U.S. Supreme Court decision gave same-sex marriage equal protection status and, therefore, any objection to service a gay wedding is the same as an objection to serve a gay individual. But his dissent broadened that protective status.

“However, gay marriage and same-sex relationships are now recognized under the United States Constitution as a fundamental right,” Taylor wrote. “Regardless of personal or religious beliefs, this is the law that courts are duty-bound to follow.”