(WNS)–A Kentucky county clerk will not have to issue marriage licenses to same-sex couples while she appeals her case to the 6th U.S. Circuit Court of Appeals.

U.S. District Judge David Bunning said Aug. 17 Rowan didn’t deserve a reprieve from last week’s order but gave her one because “emotions are running high on both sides of the debate.” 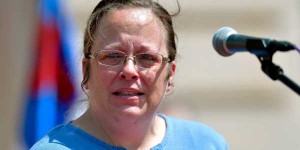 After the U.S. Supreme Court legalized same-sex marriage across all 50 states, Davis stopped issuing any marriage licenses. She and her supporters want the Kentucky legislature to pass a law protecting clerks from penalties for not issuing licenses to same-sex couples, but Gov. Steve Beshear, a Democrat, has said he won’t call a special session to consider the issue.

In asking Bunning for a stay, Davis’ attorney said the order would force his client to violate her conscience.