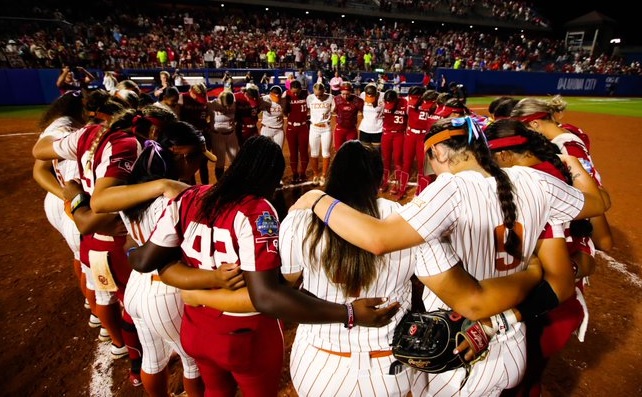 Before the Women’s College World Series championship series began, Oklahoma chaplain Sarah Roberts told her team the Biblical story of Peter walking on water. It’s a story of faith: You can’t walk on water if you don’t get out of the boat.

That became the team’s new mantra — “Get out of the boat.” Led by their faith, as well as another dominant display of hitting and defense, the Sooners defeated Texas, 10-5, Thursday night to claim their second straight national championship and sixth in program history. All of Oklahoma’s national titles have come under the leadership of head coach Patty Gasso.

The 2022 Oklahoma Sooners softball team (59-3) is one of the most dominant ever. Ranked No. 1 in the country all season long, it entered the postseason as the heavy favorite. The Sooners suffered only three losses prior to the championship series, yet one of those defeats was to the opponents on the other side of the field: the Texas Longhorns, who entered the Chapionship game undefeated in WCWS elimination games.

Texas took a 2-0 lead in the first inning, though it could have been more if not for Oklahoma outfielder Jayda Coleman’s highlight-worthy catch, robbing Courtney Day of a home run and ending the Texas scoring threat. Oklahoma tied the game 2-2 in the top of the fourth inning, then in the following inning a two-out double by Alyssa Brito gave the Sooners their first lead. They never looked back.

Kinzie Hansen added a three-run homer in the next at-bat to make it 6-2. The Sooners eventually stretched their lead to 10-2 in the sixth inning thanks to a three-run home run by senior Grace Lyons. 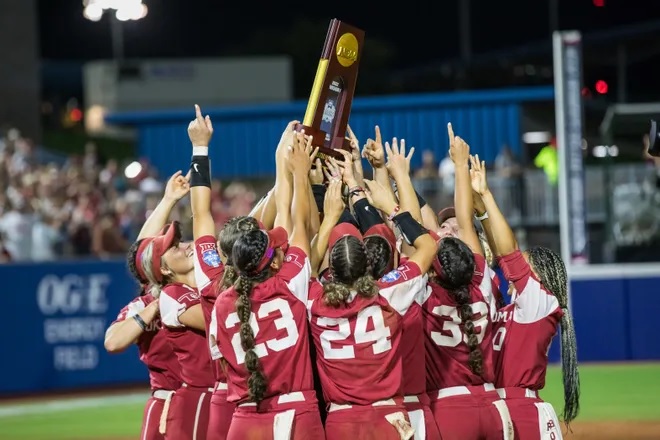 The memorable night also marked the end of Jocelyn Alo’s storied career. This season she became the first player in NCAA softball history to hit 30 home runs with a batting average over .500. She was named the tournament’s Most Outstanding Performer after hitting five home runs, scoring 12 times and reaching 32 total bases — all WCWS records. Her 122 career home runs are also an NCAA Division-I record.

Typically a player who sees the field on defense sparingly, Alo was sent to left field in the bottom of the seventh in what was effectively a curtain call. She promptly recorded two outs before being subbed. On the way to the dugout, she was showered with cheers from the crowd.

Following the game, while speaking with ESPN’s Holly Rowe, Alo praised God. “I don’t think anything will ever compare to that,” she said, fighting back tears. “I love this game, and I’m sad to be walking away from it, but I’m happy that I ended on top. I’m just so blessed for this journey that God has blessed me with.”

The Sooners program is made up of many players and coaches who profess faith in Christ, which Gasso and Roberts said is in part a credit to Lyons’ leadership. “I’ve seen lives change. I’ve seen kids being baptized. I’ve seen their Bible study groups,” Gasso said in a media session prior to the WCWS. “It is incredible, and it’s not like we’re trying to force anything on anyone, it’s just how this team is and who they are.”

Roberts recently told Sports Spectrum that sophomore second baseman Tiare Jennings and Brito both gave their lives to Christ and got baptized this season. Coleman announced on Instagram that she gave her life to Christ on Easter Sunday and planned to be baptized at the conclusion of the season.

Whatever the outcome, and even in the celebration after defeating a rival in the national championship series, Sooners players and coaches can be found gathered around the pitching circle in prayer. Oftentimes, members of the other team will join them. Gasso said seeing such boldness in faith moves her to tears.

“Whether we win or lose, they’re not afraid to ask,” Gasso said in the press conference. “When you see Longhorns and Sooners, and Cowgirls and Sooners, that’s really saying that this is bigger than softball. “Just bringing them in, praying, thankful, and just understanding what this is about, which is much more than just softball. I couldn’t be more proud. I’m the luckiest in the world.”

Gasso has certainly accomplished a lot on the field during her time at Oklahoma, and she now has another trophy to add to her growing collection. But what God has accomplished in the hearts of countless Sooners players through the years is infinitely more important.