Left Behind is an Epic! Don’t Miss It!

By Janey DeMeo
VISTA, CA (ANS) — If you’re one of the 65 million people who have read the New York Times bestselling end-times book series Left Behind, co-authored by Jerry B. Jenkins and Tim LaHaye, then you might wonder if the movie of the same name will do the story justice. Well, it does. Left Behind, starring Nicolas Cage, is an epic. 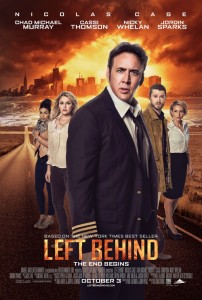 Rayford Steele (Nicolas Cage), husband, father of two, and pilot with Pan-Con, had planned an adulterous getaway with beautiful air-hostess, Hattie (Nicky Whelan), when disaster hits. Half the people in his plane, including children, have mysteriously and suddenly disappeared-leaving those who remain in total panic.An apocalyptic fictional drama, Left Behind, The End Begins, is based on a generally accepted interpretation of biblical revelation concerning the “rapture” of the church-a time when believers in Jesus will meet Him in the air unleashing the darkest seven years in history.

Unable to make contact with the grounds crew, Steele struggles to find a way to land the plane and, since his co-pilot has disappeared, he accepts the help of Buck Williams (Chad Michael Murray), a renowned journalist who likes Ray’s daughter Chloe (Cassi Thomson). Chloe, like her father, does not share the Christian faith of her mother and brother Remy-both o f whom have disappeared with millions of other believers.

Although based on the same story, this film is not to be mistaken with the earlier Left Behind movie starring Kirk Cameron (www.imdb.com/title/tt0190524/?ref_=ttsnd_snd_tt).

Stunning music and A-line actors-hey, Nic Cage no less-this new movie is more in par with high Hollywood standards, making it another feather in the cap for Hollywood’s official “Year of the Bible.”

Check out the Left Behind trailer here: youtu.be/GrXe8YDbzYs

Out in theaters now, Left Behind is destined to become a blockbuster. Don’t miss it.