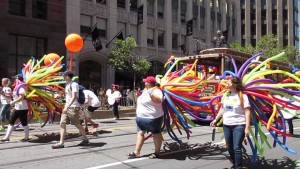 nd the world check another item off their bucket list and take their children to Disney World. After all, Disney has won the hearts of children for decades, and children are drawn to everything from Disney princesses, to superheroes.

And every child who enters Disney World wants a pair of the famous Mickey Mouse ears, to strut their Disney creds… which makes Disney’s latest attack on children beyond reprehensible.

Mommy Underground has reported story after story on how Disney has pushed its pro-LGBT agenda onto children, from lacing TV shows with LGBT themes, to targeting Disney princesses and other beloved characters. But this time, Disney cut through the heart and soul of every parent, by hijacking the Mickey Mouse ears, as a token to promote “gay pride” month.

Disney knows scoring a pair of Mickey Mouse ears is a rite of passage for every child who enters Disneyworld. Desperate to push their pro-LGBT agenda onto children, they’ve created rainbow Mickey Mouse ears, which they are calling the “Mickey Mouse Rainbow Love” hat, and are selling them all over Disney World, in hopes children will wear them.

“The child’s hat features the iconic ears in rainbow strips, and the front is embroidered with Mickey’s gloves forming the shape of a rainbow heart.

Disney stores have long carried various “Pride” products, including collectible rainbow pins. Disney also has a history of accommodating the sometimes raucous unofficial annual “Gay Days” at Disneyland and Disneyworld. The behavior displayed has caused some in the LGBT community to openly criticize the event.

Parents who take their child to Disneyworld to see Mickey Mouse should not have to shield their children from vulgarity and perversion. But Disney continues to prove over and over, they are no longer safe for children.

Make no mistake, the cunning minds who are behind this latest Disney stunt, know exactly what they are doing. By having children run around with rainbow-colored Mickey Mouse ears, they can yet again use children as pawns to promote their LGBT agenda. And of course, leftist media outlets are already drooling over the latest attempt to target children. They don’t even hide the fact that Disney has sold out to the LGBT agenda, full force.

“Earlier this month, the company, which has been steadily increasing its representation of the LGBTQ community in television and film, debuted rainbow-colored Mickey Mouse ears for sale at its U.S. theme parks. The ears arrived just ahead of Pride month in June.

The merchandise has been spotted at both California’s Disneyland and the Walt Disney World resort in Orlando, Florida. Images of the ears, officially known as the “Mickey Mouse Rainbow Love” hat, have popped up across social media as of late. However, it doesn’t appear among the items for sale on the official Disneyland or Walt Disney World websites.”

It takes a sick group of people to scheme up ways to manipulate and use children, to push an agenda that children don’t understand. And leftist parents are overjoyed at the latest Disney stunt and are eager to use their own children as a method to push the LGBT agenda.

Attacking children in the heart of Disney World, there’s no telling how low they’ll continue to go.