(WNS)–An appeals court in the Libyan capital on March 22 ruled against an agreement with Italy to try to curb the surge of migrants crossing the Mediterranean Sea. The ruling marks a blow to Italy’s response to the crisis even as Libya’s political instability continues to exacerbate it.

Former Justice Minister Salah al-Marghani and five other people who brought the case argued al-Serraj had no power to sign the deal and said the plan to return the migrants to Libya was too controversial. 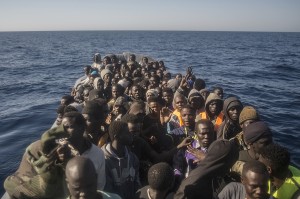 Refugees and migrants from different African countries wait to be assisted by an NGO aboard an overcrowded rubber boat, about 20 miles North of Sabratha, Libya, Saturday, March 4, 2017. A rescue ship belonging to a Spanish NGO has saved 250 migrants in danger of capsizing near the Libyan coast on Saturday. Proactiva Open Arms spokesperson Laura Lanuza says that the NGO’s boat rescued the African migrants from two small rubber vessels that were at risk of being overwhelmed by the sea. (AP Photo/Santi Palacios)

Libya descended into crisis in 2011 after NATO-backed rebels overthrew and killed longtime authoritative leader Muammar Qaddafi. Italy in January reopened its embassy in the capital city of Tripoli after it closed two years ago due to the country’s unrest. The memorandum also included the promise of developmental programs in renewable energy and infrastructure, among other sectors.

Issandr El Amrani, the North Africa Project Director with the International Crisis Group, said the deal might politically work for Italy since it shows the government making an effort to tackle the migrant flow. But Libya’s political instability means the deal would not have much impact in the country, he said.

“The Government of National Accord has virtually no capacity to actually do much,” El Amrani said. “Since its legitimacy is contested, its opponents say it has no right to sign such an agreement and is only doing so to get Italian support.”

Libya in 2016 created the Government of National Accord as an interim government in a bid to end the civil war. But several political officials have failed to accept its authority, and the lack of legitimacy has allowed the country’s migrant crisis to thrive amid lawlessness.

“The chaos has allowed people-smuggling networks to operate with impunity, and countering these is not a priority for any of the belligerents,” El Amrani said.

The head of the United Nations Support Mission in Libya, Martin Kobler, expressed concern Wednesday over persistent reports of human rights violations in the country. The International Organization for Migration earlier this month reported 22 migrants died in a clash between rival people-smuggling groups. Kobler called on Libya’s political and security leaders to muster the political will to enforce the human rights and security provisions stipulated in Libya’s Political Agreement.